Across the Wide Missouri

In fur-trapping country, Flint Mitchell depends on his single-shot rifle and his courage when he heads into Blackfoot territory with his fellow mountain men -- and with his new Blackfoot bride who may be the key to their safety. 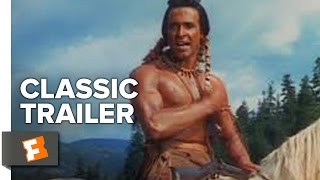 In fur-trapping country, a man depends on his single-shot rifle and his courage. One of those men is Flint Mitchell (Clark Gable), who heads into Blackfoot territory with his fellow mountain men -- and with his new Blackfoot bride (Mar?a Elena Marques) who may be the key to their safety in the dangerous land.

Mitchell is a rough, buckskinned man of action and Gable shows he's more than rough enough to portray him in a brawling frontier tale. William Wellman directs, filming in the Colorado Rockies and combining spectacular Technicolor vistas with colorful characters who don't let the hardships of wilderness life get in the way of a good time.

Relations between Native Americans and white settlers in early-19th-century America provide the dramatic focus of this William Wellman Western. The time is 1829, and trapper Flint Mitchell (Clark Gable) heads into the wilderness in search of valuable beaver pelts. In order to get a foothold in the hostile Blackfoot Indian territory, Mitchell marries a Blackfoot woman named Kamiah (played modestly by Mexican film star Maria Elena Marques) whom he slowly begins to truly love. Accompanied by a band of intrepid trappers, the newlyweds press deep into the untamed land despite persistent aggression from its angry native inhabitants. The area in which they trek is beaver country, controlled by Kamiah's grandfather. An unseen man (Howard Keel) effectively narrates the story--he is identified as the Kamiah and Flint's son. Spectacular Rocky Mountain photography makes ACROSS THE WIDE MISSOURI an exceptional visual treat. Veteran action and Western director Wellman is right at home with the thrilling battle and trekking sequences.

Adventure | Indians | Recommended | Theatrical Release
This product is made-on-demand by the manufacturer using DVD-R recordable media. Almost all DVD players can play DVD-Rs (except for some older models made before 2000) - please consult your owner's manual for formats compatible with your player. These DVD-Rs may not play on all computers or DVD player/recorders. To address this, the manufacturer recommends viewing this product on a DVD player that does not have recording capability.

Pillars of the Sky
$19
Add to Cart