An adventure that avalanches from the bullet-proof roof of the Rockies to the fiery desert floor! 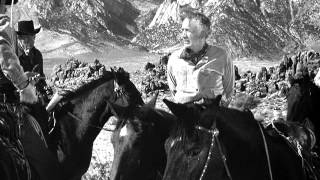 Along the Great Divide - Clip

Kirk Douglas aims for justice in his first Western role!

For his first movie Western, Kirk Douglas rode in good company. Directed by Raoul Walsh and filmed in the rugged High Sierras and Mojave Desert, Along the Great Divide is a lean, bullet-hard sagebrush saga.

Douglas plays a U.S. Marshal who rescues an accused murderer (Walter Brennan) from mob justice, then escorts the wily old coot to trial. En route the lawman confronts pursuing vigilantes, a blinding windstorm, a rebellious deputy (John Agar) with an itchy trigger finger and a woman (Virginia Mayo) who, as the prisoner's loyal daughter and the marshal's newfound love, is torn between femme and fatale. Stoically facing these obstacles with a grin, grimace or six-gun, Douglas invests his role with a rugged individualism foreshadowing even greater work under Western skies

A cowboy yarn with all the usual elements of an innocent man facing mob justice, a powerful cattle baron willing to take the law into his own hands and spectacular High Sierra vistas - but interesting as Douglas's first Western outing.

In "Along the Great Divide," Kirk Douglas made his debut in a western -- a genre that subsequently brought him much fame.
Douglas plays Len Merrick, a U.S. marshal who rescues Pop Keith from a lynching. The old cattle rustler was accused of murdering the eldest son of cattle baron Ed Roden, who then decided to take the law into his own hands.
When Merrick brings the old man into custody -- and safely away from Roden's lynch mob -- he finds that he has an entire posse of his trail. Then the marshal discovers a surprising new suspect in the killing... Roden's other son.