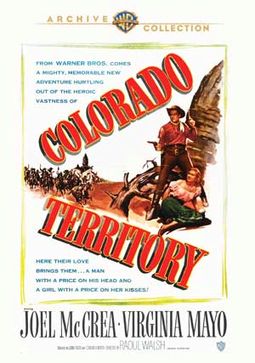 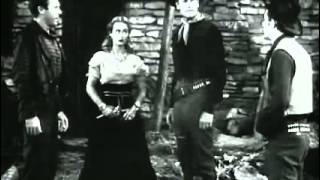 Though not acknowledged by contemporary reviewers, COLORADO TERRITORY is a westernized remake of the 1941 crime drama HIGH SIERRA. Raoul Walsh, director of the earlier film, returns to helm the remake, doing a grand job on both occasions. Joel McCrea stars in the Humphrey Bogart role, playing a veteran outlaw who hopes to pull off one last, spectacular heist. Virginia Mayo portrays the Ida Lupino counterpart, a "bad" dance-hall girl who proves to be the only person who genuinely cares about McCrea's well-being. As in the earlier film, the climax finds McCrea making a futile bid for escape in the mountains, with tragic consequences. HIGH SIERRA was good for at least one more remake, the 1955 Jack Palance-Shelley Winters starrer I DIED A THOUSAND TIMES.

Outlaws | Escape | Crime | Mountains
This product is made-on-demand by the manufacturer using DVD-R recordable media. Almost all DVD players can play DVD-Rs (except for some older models made before 2000) - please consult your owner's manual for formats compatible with your player. These DVD-Rs may not play on all computers or DVD player/recorders. To address this, the manufacturer recommends viewing this product on a DVD player that does not have recording capability.

The Gunfight at Dodge City
$19
Add to Cart

Customer Rating:
Based on 2981 ratings.


i am a big bogart fan and a big western fan and when i heard this was a western remake of high sierra,i had to see it and was pleasantly suprised.virginia mayo plays the the ida lupino part,and long time soap star and movie dancer james mitchell plays one of the gang members that befriends the noted owtlaw played by mccrea.this has a dark film noir feel to it with great photography, and a clear indication that mccrea was a better actor that people give him credit for.if you like him in this try,hitchcocks foriegn correspondent funny spy film,and another dark westrn that co-starred his real life wife, four faces west,both very different than the western hero we are used to.
steve cannon the king of trivia