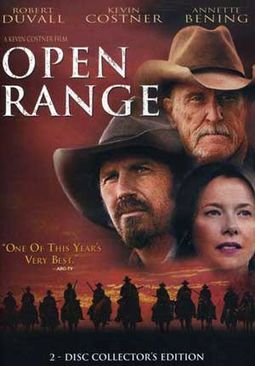 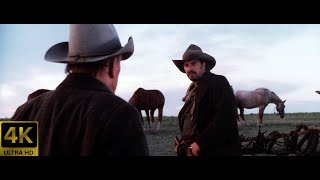 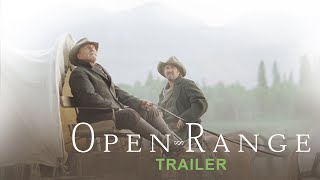 Set in the early 1880s, this Western directed by Kevin Costner (DANCES WITH WOLVES, THE POSTMAN) is a classic tale of the good guys verses the bad guys with a romance thrown in for good measure. Boss Spearman (Robert Duvall) and Charley Waite (Kevin Costner) are free grazers, riding herds of cattle across the country and grazing as they go. But a local rancher, Denton Baxter (Michael Gambon), considers Boss and his boys thieves, and is determined to run them out of his town by any means possible--even murder. Duvall is endearing as the tough but tender Boss, who has the courage of his convictions and refuses to be intimidated by Baxter. Costner's Charley has worked for Boss for ten years while trying to forget his past, only to find himself drawn back into conflict. Lovable Mose (Abraham Benrubi) and teenager Button (Diego Luna) round out the free grazers' team. Annette Bening stars as the town doctor's sister, Sue, who is drawn to Charley's gentle demeanor and is unfazed by his ability to kill. Beautiful scenery, a script peppered with humor, and solid performances--especially from Duvall and the supporting cast--make Costner's fourth foray into directing enjoyable.

Open Range
Packed with epic action, OPEN RANGE is a powerfully gripping story that's never been told until now, and stars Academy Award(R) winners Robert Duvall (1983 Best Actor, TENDER MERCIES) and Kevin Costner (1991 Best Director, DANCES WITH WOLVES), and Academy Award(R) nominee Annette Bening (1999 Best Actress, AMERICAN BEAUTY). A group of free grazers, four men trying to escape their past, are driving cattle and living off the land on the open range -- a place where nature makes the only laws. When a ruthless, evil rancher tries to run them out of town, the men's peaceful existence takes a tumultuous turn and ends in the grittiest, most explosive gunfight on film as two men battle a town for honor, justice, and a way of life that's quickly disappearing.