The King and Four Queens

The King plays the hottest game in the West . . . with four Queens! 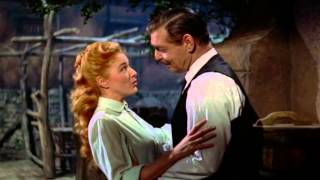 "You're a woman after my own heart. Tougher than leather, smarter than spit, and colder than January." -- Dan Kehoe (CLARK GABLE) to Sabina (ELEANOR PARKER).
"We're two of a kind."
- Sabina, in reply.

This offbeat western finds escaped desperado Dan Kehoe (Clark Gable) holed up in a desert ghost town, inhabited only by four beautiful young widows and their flinty, gun-totin mother-in-law (Jo Van Fleet). Oozing an endless supply of charm and masculine virility, Gable sets his sights on this shapely harem and the $100,000 in stolen gold hidden somewhere close by.

While staying in a desert ghost town whose only inhabitants are four young widows and their mother-in-law, a man who shoots fast and thinks quick sets his sights on this harem and $100,000 in gold.

The four widowed wives of a gang of bandits are sitting on the collected booty in a western town. But fortune hunter Dan Kehoe has plans to get the goods... by sweet talking each of the women, one by one.
Which lucky lady will get the cowboy... and the loot'

The Shootist
$10
Add to Cart

Wake of the Red Witch
$17.20 Super Savings
Add to Cart

The Gambler from Natchez (DVD-R)
$19
Add to Cart