Archaeologist Andrew Larabee tunnels below an English meadow, seeking a rare historical relic. His shoveling takes him back to the surface...and into the lions' cage during a circus act. Just like that, a star -- or at least a Joey (clown)-- is born. 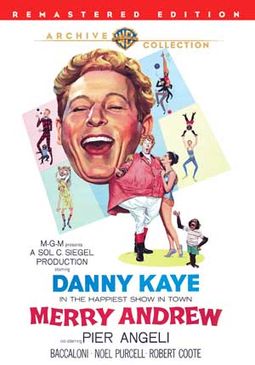 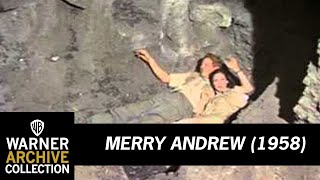 Archaeologist Andrew Larabee tunnels below an English meadow, seeking a rare historical relic. His shoveling takes him back to the surface...and into the lions' cage during a circus act. Just like that, a star -- or at least a Joey -- is born. A Joey is circus-speak for clown and who better to play that clown than Danny Kaye?

The effusive star unleashes his singing, swooning and jesting talents in this bright musical-comedy tale of circus extravaganza and romantic complications. Famed choreographer Michael Kidd (Seven Brides for Seven Brothers) makes his lone movie directorial effort one to cheer the heart, particularly with the rolling-bicycle number "Everything Is Tickety-Boo" and in the center-ring-romp "Salud." Have a Merry Andrew time!

Though MERRY ANDREW is more subdued than earlier Danny Kaye efforts, it's still a lot of fun. Kaye is cast as Andrew Larabee, a mild-mannered but highly unorthodox archeology professor at a British boy's school. While on an expedition in Italy, Andrew allows a traveling circus to pitch camp on his archeological site. Falling in love with Selena (Pier Angeli), the acrobat daughter of carnival owner Antonio Gallini (Salvatore Baccaloni), Professor Larabee soon finds himself participating in their show as a clown, ringmaster, and (accidental) lion-tamer. When time comes for Andrew to return to his stuffy academic existence -- not to mention his equally stuffy fiancée (Patricia Cutts) -- he chooses instead to hit the sawdust trail in the company of the fair Selena. The five Saul Chaplin-Johnny Mercer songs are enjoyable, but the engaging "patter numbers" written by Kaye's wife, Sylvia Fine, are sorely missed.

Romance | Romances | Teachers | Love
This product is made-on-demand by the manufacturer using DVD-R recordable media. Almost all DVD players can play DVD-Rs (except for some older models made before 2000) - please consult your owner's manual for formats compatible with your player. These DVD-Rs may not play on all computers or DVD player/recorders. To address this, the manufacturer recommends viewing this product on a DVD player that does not have recording capability.