A barmaid sacrifices her own safety to help five fugitive British airmen escape from France. 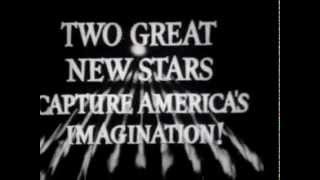 Under the brutal martial law of Nazi-occupied France, many risked their lives to help keep the world free from Nazi domination. This is the story of one such woman -- a simple barmaid named Joan (Michele Morgan) who sacrifices her own safety to help five fugitive British airmen escape from France. From the time the airmen make their rendezvous with a British agent in a Paris church, they become the desperate quarry of the unrelenting Nazi Gestapo. Now, Joan must devise a means of escape for the men and finds herself falling in love with the squadron leader (Paul Henreid).

At first glance, we seem to be watching the 1934 Fred Astaire/Ginger Rogers musical THE GAY DIVORCEE, which opens with a montage of Paris nightspots. Suddenly, however, stock footage from that earlier film is cut short, the screen goes dark, and an offscreen radio voice announces the Nazi invasion of France. At this point, the plot of JOAN OF PARIS gets under way. Michèle Morgan plays a Parisian barmaid, Joan, whose patron saint is Joan of Arc. Thus, she considers it her bounden duty to aid Free French pilot Paul Lavallier (Paul Henreid) and his RAF comrades (one of whom is Alan Ladd) in their efforts to escape from occupied France. And if this means that Joan must face death at the hands of slimy Gestapo chief Herr Funk (Laird Cregar), she's eager and willing to make that sacrifice. One of the earliest French Underground dramas, JOAN OF PARIS posted a neat profit for ever-in-the-red RKO Radio Pictures.

Death | Spies | War | Nazis | Espionage | Spy | France | Paris, France | Pilots | Love
This product is made-on-demand by the manufacturer using DVD-R recordable media. Almost all DVD players can play DVD-Rs (except for some older models made before 2000) - please consult your owner's manual for formats compatible with your player. These DVD-Rs may not play on all computers or DVD player/recorders. To address this, the manufacturer recommends viewing this product on a DVD player that does not have recording capability.