An Enemy of the People G
Warner Archive Collection (series)

Small-town doctor who discovers that the local hot springs, which the townsfolk market for their "medicinal" effects to drive up tourism, are polluted by runoff from the local tanning mill. 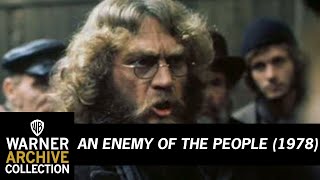 An Enemy of the People (Original Theatrical Trailer)

Steve McQueen ("The Getaway," "Bullitt") stars as an idealistic, small-town doctor who discovers that the local hot springs, which the townsfolk market for their "medicinal" effects to drive up tourism, are polluted by runoff from the local tanning mill. The town leaders fear that the cost of cleaning up the toxic waste, and the resultant drop in tourism if the news got out, would hurt the town, so it becomes up to the doctor to spearhead the battle and protect the town's land and residents. Co-starring Academy Award-nominee Charles Durning (TV's "Evening Shade," "Tootsie"), Bibi Andersson ("Persona," "I Never Promised You a Rose Garden") and Richard Dysart (TV's "L.A. Law," "War and Rememberance"). From the Henrik Ibsen play, and adapted by Pulitzer Prize-winner Arthur Miller ("Death of a Salesman," "The Crucible").

Steve McQueen served as both star and executive producer for this film version of the drama by Henrik Ibsen, which was adapted by Arthur Miller. When Dr. Thomas Stockmann (McQueen) discovers that a tannery has dangerously polluted a hot spring in his community, he feels that it is his duty to share this information with the people. However, a number of prominent citizens (including Stockmann) intended to use the hot springs as the centerpiece of a health spa, and Tom's brother Peter (Charles Durning), the town's mayor, contends that a clean-up of the spring would be impractical, expensive, and would scare off potential customers. Stockmann is still eager to share his story with the community, but the town council is determined to silence him, and in time they turn public opinion against him. The outcry against Stockmann's activism eventually ruins his medical practice and drives a wedge between Stockmann and his wife Catherine (Bibi Andersson). While AN ENEMY OF THE PEOPLE became a pet project for McQueen, it received indifferent reviews and poor distribution, opening in only a few scattered American cities several years after it was completed.

Heroes | Brothers | Families | Scientists
This product is made-on-demand by the manufacturer using DVD-R recordable media. Almost all DVD players can play DVD-Rs (except for some older models made before 2000) - please consult your owner's manual for formats compatible with your player. These DVD-Rs may not play on all computers or DVD player/recorders. To address this, the manufacturer recommends viewing this product on a DVD player that does not have recording capability.