They smash through skylights, tumble down staircases, drop from a high rooftop into a waiting convertible -- the only fall Skipper Clark and his pals won't take is to fall in love. 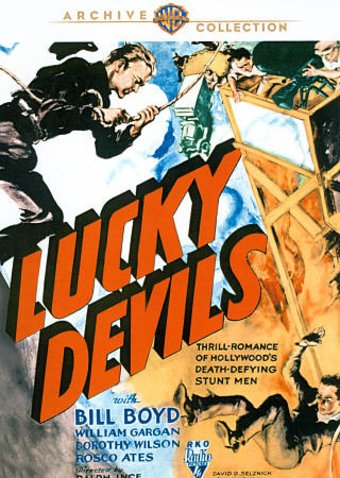 They smash through skylights, tumble down staircases, drop from a high rooftop into a waiting convertible -- the only fall Skipper Clark and his devil-may-care pals won't take is to fall in love. That's because Skipper, Bob Hughes and their fellow stuntmen know that the concerns of a wife and family don't mix with the risks of a Hollywood stuntman's career. Yet Skipper falls hard for lovely Fran. After their marriage, he loses his nerve during the shooting of a dangerous two-man scene, putting Bob's life in peril. Skipper is then shunned by his profession and, desperate for funds, agrees to perform an almost-suicidal waterfall stunt refused by the other stunt-men.

Though the story isn't much, this actioner does offer a neat behind-the-scenes look at the travails of Hollywood stuntmen as it chronicles the romance between a stunt man and an extra.

Action | Behind The Scenes | Filmmaking
This product is made-on-demand by the manufacturer using DVD-R recordable media. Almost all DVD players can play DVD-Rs (except for some older models made before 2000) - please consult your owner's manual for formats compatible with your player. These DVD-Rs may not play on all computers or DVD player/recorders. To address this, the manufacturer recommends viewing this product on a DVD player that does not have recording capability.