In this unusually accurate biography, small-time hood Al Capone comes to Chicago at the dawn of Prohibition to be the bodyguard of racketeer Johnny Torrio. 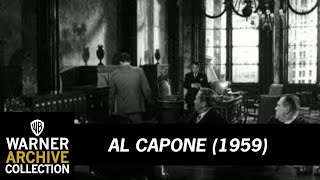 During the era of Prohibition, gangsters gained enormous power by controlling the illicit drink. The most infamous was a thug from Brooklyn who murdered his way to the top and was, for a time, one of the most powerful men in the United States. In this unusually accurate biography, small-time hood Al Capone (Rod Steiger) comes to Chicago at the dawn of Prohibition to be the bodyguard of racketeer Johnny Torrio. Capone's rise in Chicago gangdom is followed through murder, extortion, and political fraud. He becomes head of Chicago's biggest "business," but moves inexorably toward his downfall and ignominious end.

Rod Steiger is the screen's first "method mobster" in the title role of AL CAPONE. The film traces Big Al's progress from a torpedo in the hire of Chicago gangster Johnny Torrio (Nehemiah Persoff) to Capone's takeover of the Windy City's bootlegging operations, and his ultimate downfall at the hands of the IRS. Rod Steiger delivers every line with maniacal gusto, as though it will be his last; sometimes he sounds like Frank Gorshin doing a Rod Steiger impression, but for the most part it is a dynamite performance. Featured in the cast are Murvyn Vye as Bugs Moran, Joe De Santis as Big Jim Colosimo, Lewis Charles as Hymie Weiss, Robert Gist as O'Banion, and James Gregory and Martin Balsam as composite characters, respectively based on honest Chicago cop John Siege and duplicitous newspaper reporter Jake Lingle.

Crime | Mafia | Gangsters | Biographical
This product is made-on-demand by the manufacturer using DVD-R recordable media. Almost all DVD players can play DVD-Rs (except for some older models made before 2000) - please consult your owner's manual for formats compatible with your player. These DVD-Rs may not play on all computers or DVD player/recorders. To address this, the manufacturer recommends viewing this product on a DVD player that does not have recording capability.