Soldier in the Rain

"A comedy-drama about a smooth operating master sergeant who is constantly getting his hero-worshiping, protege out of situations. Add a real-life Lolita teen, and the two become part of an intriguing love triangle." 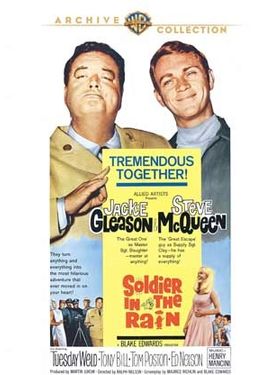 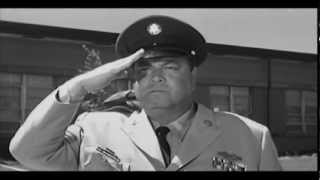 His own soda pop machine. Air conditioning. The finest cotton underwear. Someone else doing the work. That's M/Sgt. Maxwell Slaughter's (Jackie Gleason) game - and man, can he play it. Just ask Supply Sgt. Eustis Clay (Steve McQueen), who idolizes the big, shrewd, supremely self-confident older man. Maybe someday they can go into business together. In the meantime, how about a hot double date? So Clay fixes Slaughter up with a teenybopper named Bobby Jo (Tuesday Weld), a move that sets off a chain reaction of laughs and drama. Gleason and McQueen make a surprisingly engaging comedy team in this overlooked gem (co-scripted by Blake Edwards, who at this time was also embarking on The Pink Panther movie series) that showcases both stars' unique talents."

This bittersweet comedy/drama is based on a novel by William Goldman.The fairy tale like story revolves around two contemporary army buddies, played vigorously by Jackie Gleason and Steve McQueen. Gleason is Master Sergeant Maxwell Slaughter, the smooth operator, who supply Sergeant Eustis Clay (Steve McQueen) idolizes and hopes will join him as a civilian in a private business enterprise.Clay endeavors to be a player in the military, just like Slaughter, but it seems as though Clay still has a lot to learn from his mentor.The two powerhouse leads are vibrantly supported by Tuesday Weld who holds her own as a shrill dizzy blonde teenager named Bobby Jo Pepperdine.Tony Bill is perfectly bumbling as Private First Class Jerry Meltzer, McQueen's screwball sidekick. Full of characters on the edge, who are pushed into rapid fire verbal skirmishes, director Ralph Nelson hits the comic moments hard without sacrificing the story's emotional depth. Watch for a classic McQueen 'jump-kick' in the final scenes.

Buddies | Scams And Cons | Military | Theatrical Release
This product is made-on-demand by the manufacturer using DVD-R recordable media. Almost all DVD players can play DVD-Rs (except for some older models made before 2000) - please consult your owner's manual for formats compatible with your player. These DVD-Rs may not play on all computers or DVD player/recorders. To address this, the manufacturer recommends viewing this product on a DVD player that does not have recording capability.

19%off
Love with the Proper Stranger
$16.20 Super Savings
Add to Cart