"The Castle," a large private psychiatric facility where, Dr. Stewart McIver devotes night and day to his profession, a neglected wife, a colleague with a fondness for booze and a pretty face; add subplots of derangement and you have "The Cobweb." 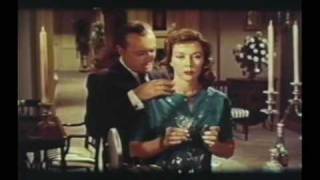 Step inside "the Castle," a large private psychiatric facility. Here, Dr. Stewart McIver (Richard Widmark) devotes night and day to his profession while neglecting his pining, voluptuous wife (Gloria Grahame). A colleague (Charles Boyer) with a fondness for booze and a pretty face seeks to comfort the wife. Now add Lauren Bacall, Lillian Gish, John Kerr, Susan Strasberg, Oscar Levant and subplots of love, life and derangement and you have the entanglements of The Cobweb. Some critics gleefully skewered the film's labored storyline about patient involvement in the choice of library draperies, but pay no heed. With its top cast and Vincente Minnelli's command of color and melodrama, this film is popcorn for fans of soaps.

At a psychiatric care hospital, the wife of the head doctor decides the site's library is in need of new drapes. This small change sparks a conflict among the staff members. As the personalities of the characters unfurl, a network of covert romantic liaisons and tensions is revealed. The support staff is as frail as the patients under their care.