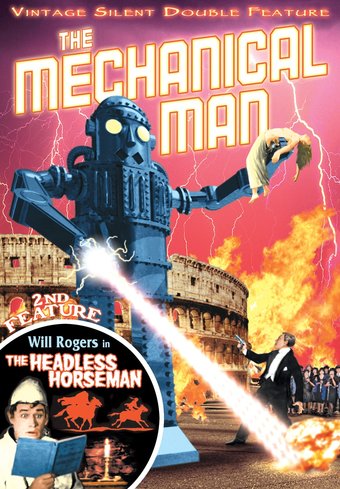 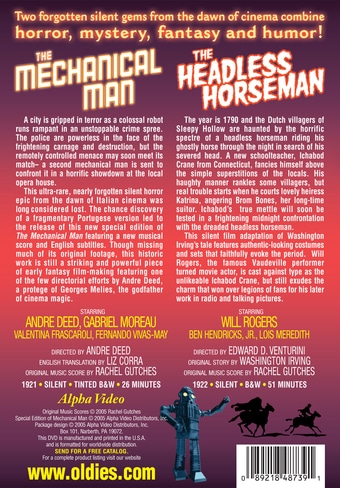 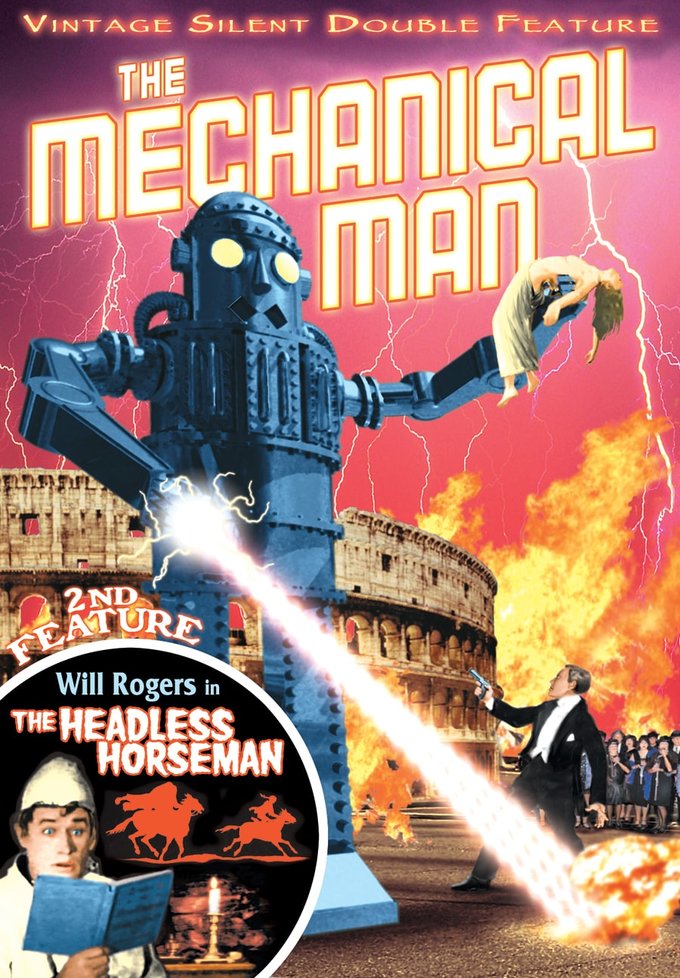 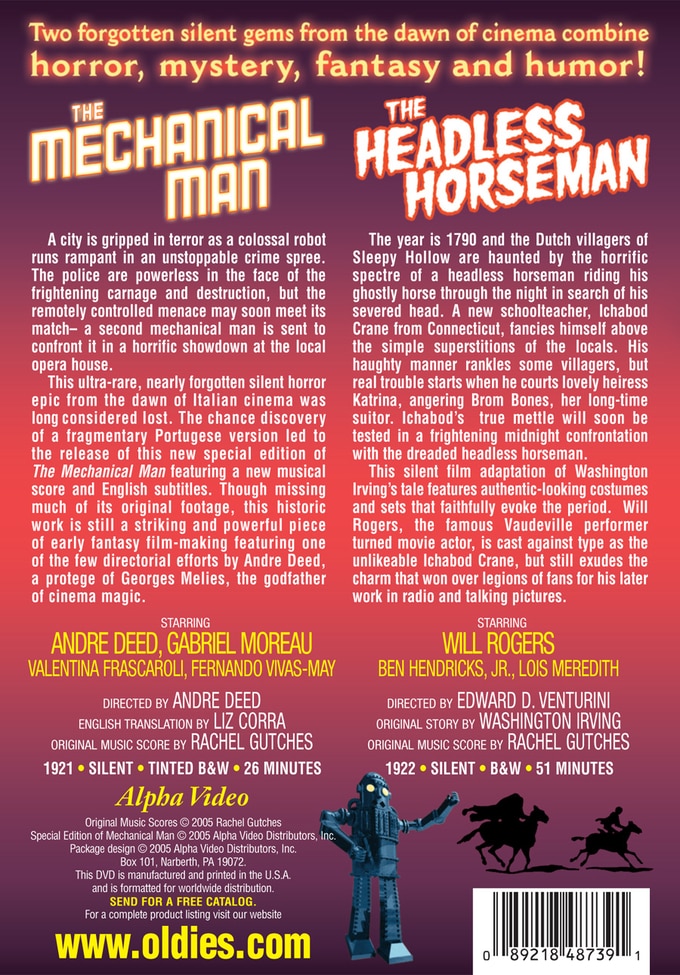 Mechanical Man (1921, 26 minutes): A city is gripped in terror as a colossal robot runs rampant in an unstoppable crime spree. The police are powerless in the face of the frightening carnage and destruction, but the remotely controlled menace may soon meet its match - a second mechanical man is sent to confront it in a horrific showdown at the local opera house.

This ultra-rare, nearly forgotten silent horror epic from the dawn of Italian cinema was long considered lost. The chance discovery of a fragmentary Portugese version led to the release of this new special edition of The Mechanical Man featuring a new musical score and English subtitles. Though missing much of its original footage, this historic work is still a striking and powerful piece of early fantasy film-making featuring one of the few directorial efforts by Andre Deed, a protege of Georges Melies, the godfather of cinema magic.

Headless Horseman (1922, 51 minutes): The year is 1790 and the Dutch villagers of Sleepy Hollow are haunted by the horrific spectre of a headless horseman riding his ghostly horse through the night in search of his severed head. A new schoolteacher, Ichabod Crane from Connecticut, fancies himself above the simple superstitions of the locals. His haughty manner rankles some villagers, but real trouble starts when he courts lovely heiress Katrina, angering Brom Bones, her long-time suitor. Ichabod's true mettle will soon be tested in a frightening midnight confrontation with the dreaded headless horseman.

This silent film adaptation of Washington Irving's tale features authentic-looking costumes and sets that faithfully evoke the period. Will Rogers, the famous Vaudeville performer turned movie actor, is cast against type as the unlikeable Ichabod Crane, but still exudes the charm that won over legions of fans for his later work in radio and talking pictures.

Suspense | Thriller | Vintage | Horror Classic | Silent Films | Horror Movies
This product is made-on-demand by the manufacturer using DVD-R recordable media. Almost all DVD players can play DVD-Rs (except for some older models made before 2000) - please consult your owner's manual for formats compatible with your player. These DVD-Rs may not play on all computers or DVD player/recorders. To address this, the manufacturer recommends viewing this product on a DVD player that does not have recording capability.


It is fantastic to see a film that was thought to be lost until so recently. Although some of the scenes are still missing, Alpha Video has done a great job filling in the blanks by giving a plot synopsis and new translations of the title cards. The print of the film isn't the best but since it is the ONLY print known to exist, it really can't be complained about. It also is a print that contains the original color tinting. The film itself is a very strange and halucinatory experience. Also included on the disc is THE HEADLESS HORSEMAN and while it isn't a film of the same caliber as MECHANICAL MAN, it was a nice bonus feature and I enjoyed it. Thanks to the folks at Alpha for making this little slice of early cinema history available to film buffs everywhere.