This true classic of German cinema recounts the legend of a giant clay monster brought to life through mysticism. 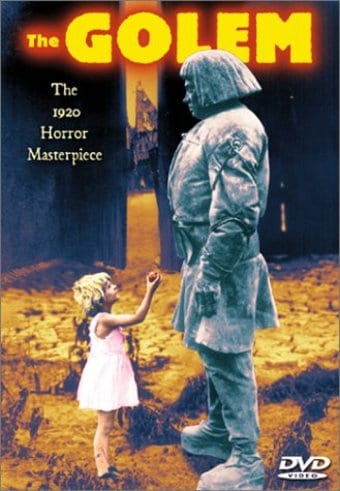 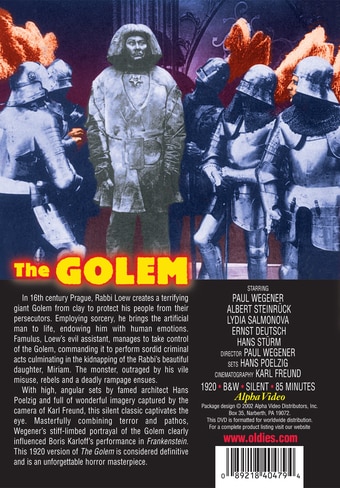 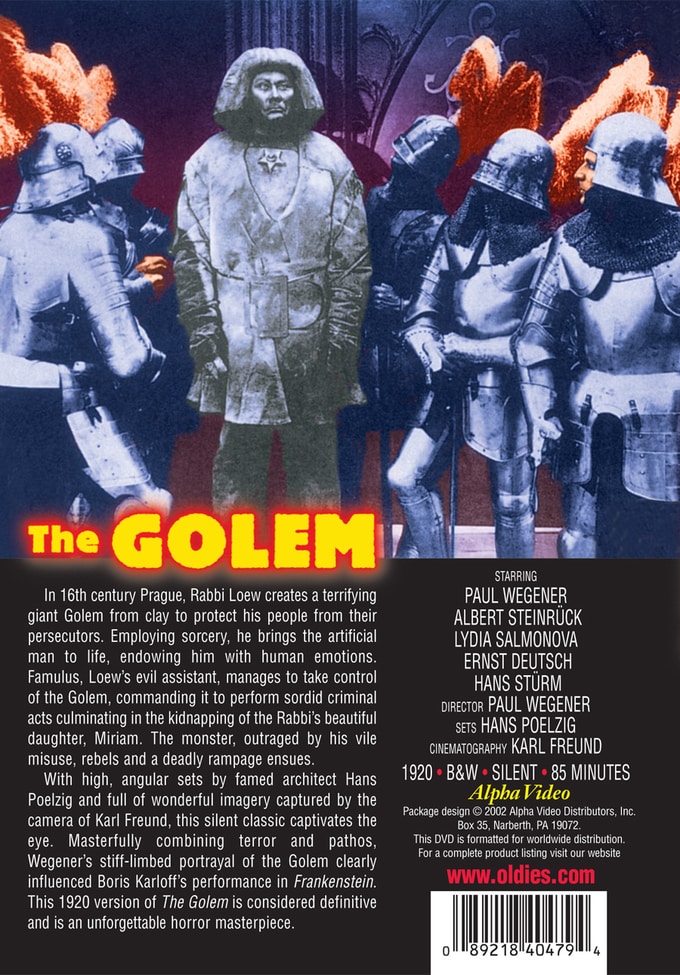 In 16th century Prague, Rabbi Loew creates a terrifying giant golem from clay to protect his people from their persecutors. Employing sorcery, he brings the artificial man to life, endowing him with human emotions. Famulus, Loew's evil assistant, manages to take control of the golem, commanding it to perform sordid criminal acts culminating in the kidnapping of the Rabbi's beautiful daughter, Miriam. The monster, outraged by his vile misuse, rebels and a deadly rampage ensues. With high, angular sets by famed architect Hans Poelzig and full of wonderful imagery captured by the camera of Karl Freund, this silent classic captivates the eye. Masterfully combining terror and pathos, Wegener's stiff-limbed portrayal of the golem clearly influenced Boris Karloff's performance in Frankenstein. This 1920 version of The Golem is considered definitive among the film's many productions and is an unforgettable horror masterpiece.

With his third version of THE GOLEM, director, writer, and actor Paul Wegener is credited with creating the first horror movie series, and historians consider THE GOLEM AND THE DANCER (his 1917 follow-up to the 1914 original) to be the first sequel in cinema history. Based on a legend in Jewish mysticism, in 16th-century Prague community leader and astrologer Rabbi Loew (Albert Steinrück) foresees doom for the Jews. When the emperor decrees a pogrom of the Jewish ghetto, Loew molds a forbidding clay golem (Wegener) to save his people. Loew invokes a demon spirit to retrieve a magic word that he places in an amulet on the creature's chest. Once the word is positioned, the giant wedge-haired automaton lives. Danger ensues, however, when Loew's assistant, Famulus (Ernst Deutsch), uses the golem to settle a score with Florian (Lothar Müthel), a knight who has stolen his sweetheart, Miriam (Lyda Salmonova). THE GOLEM's influence on future horror films was significant, particularly James Whale's FRANKENSTEIN. Wegener's distorted sets and chiaroscuro lighting, complemented by Karl Freund's expert photography, make the film an excellent example of German Expressionism and an important contribution by German mega studio UFA to the golden age of Weimar cinema.

The Curse of Frankenstein (Blu-ray)
$20
Add to Cart

Customer Rating:
Based on 6504 ratings.


Paul Wegener's portrayal of the title animated clay statue surely paved the way for future film depictions of the Frankenstein monster. Despite his robotic movements, The Golem has real personality. He smirks arrogantly when Gentile onlookers are awed by a display of his strength, leers at pretty girls when maker Rabbi Loew isn't looking, and literally glows with hellish fury when the Rabbi and his assistant attempt to turn him off by removing the magic seal on his chest. While not as nail-bitingly scary as 1922's Nosferateu, The Golem is an excellent silent horror film, well worth seeing.


As with Kubrick's 2001, The Golem is a film I can see over and over again for the sheer beauty of its images. Recently, I saw the ultra-expensive "authorized" restored version of this film and it was actually worse quality than this bargain priced disc! What a disappointment! This disc is the best version of The Golem I have ever seen. Naturally, it is not pristene. No real clean copies exist, but this is as good as it gets. I am glad I bought this and not the other expensive one. All cinema buffs should have a copy of this prototype of all monster movies. Thanks to Alpha Video for preserving a masterpiece.


This was a very good film and ranks up there with some of the very best silent movies. The movie has an eerie atmosphere throught that draws you in. The picture quality on this Alpha DVD is quite good making this quite a bargain. Highly recommended!

This is a pretty spooky silent horror flick. I thought the conjuration scene was especially well done. In it, a demon is summoned in the form of a disembodied head. Weird! This DVD is not bad quality-wise. The picture is better in the beginning and softens a bit midway through. However, it’s very good considering the age of the film and the overall effect is satisfying. Sound is what you’d expect from a silent film. Nice artwork, as always. I so pleased with this purchase that I ordered 15 other titles from these guys!!