Hawkeye And The Last of The Mohicans Volume 1

Four exciting adventures from the vintage TV series based on the classic by James Fenimore Cooper. 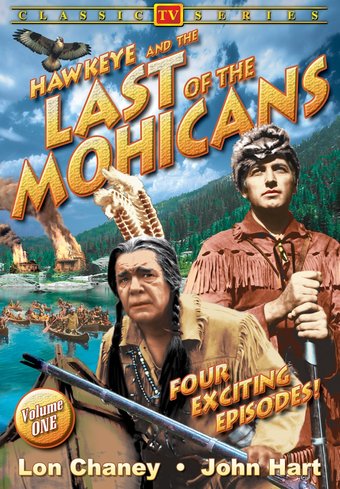 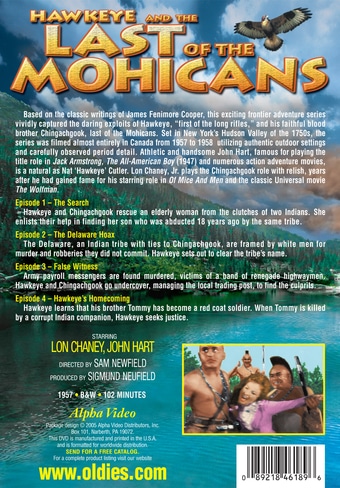 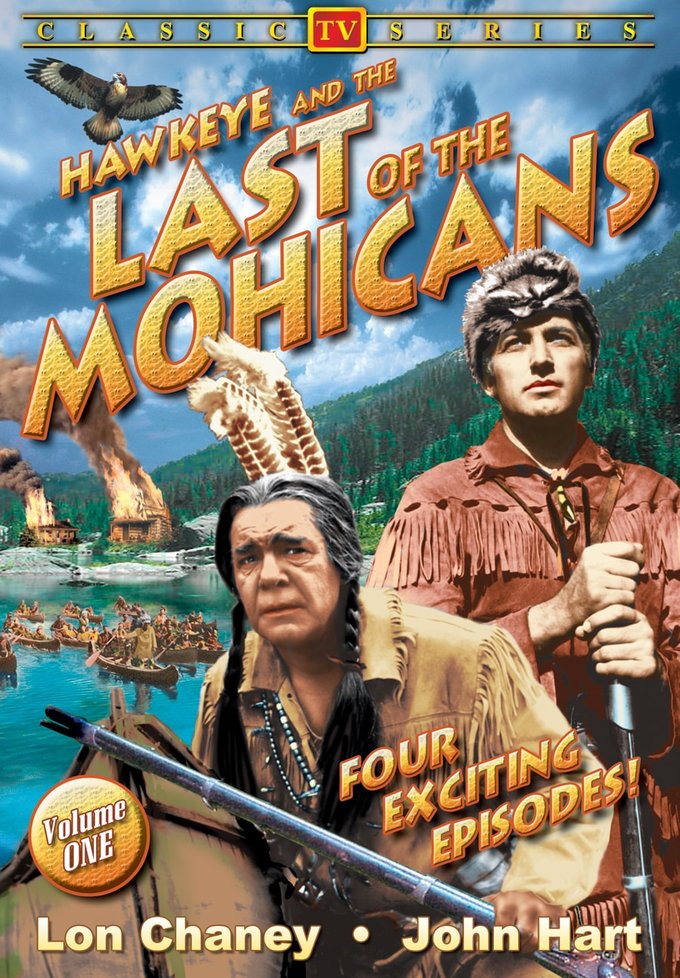 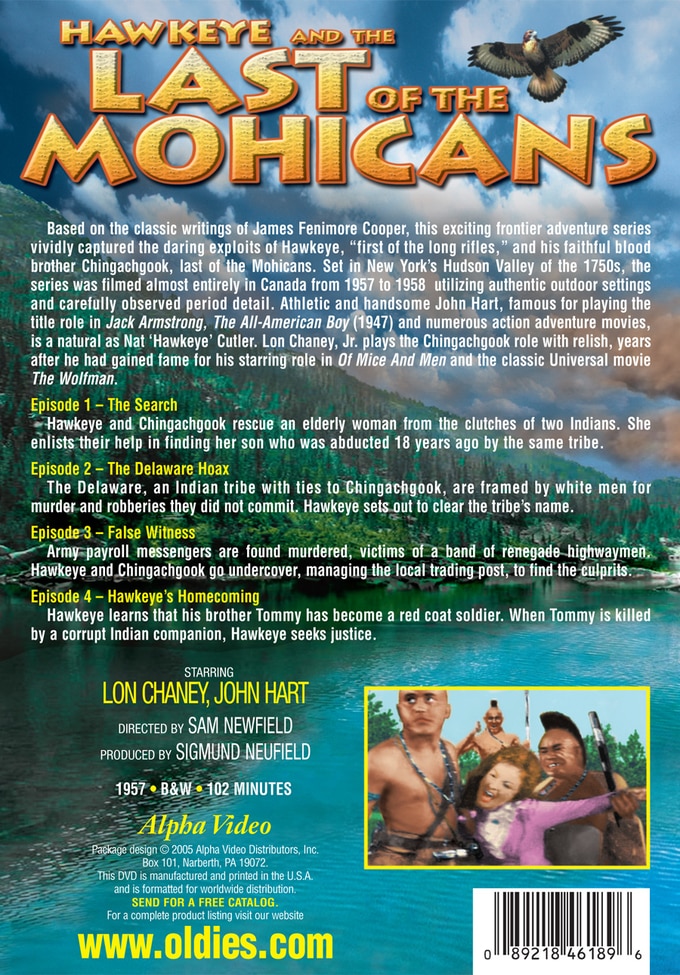 Based on the classic writings of James Fenimore Cooper, this exciting frontier adventure series vividly captured the daring exploits of Hawkeye, "first of the long rifles," and his faithful blood brother Chingachgook, last of the Mohicans. Set in New York's Hudson Valley of the 1750s, the series was filmed almost entirely in Canada from 1957 to 1958 utilizing authentic outdoor settings and carefully observed period detail. Athletic and handsome John Hart, famous for playing the title role in Jack Armstrong, The All-American Boy (1947) and numerous action adventure movies, is a natural as Nat 'Hawkeye' Cutler. Lon Chaney, Jr. plays the Chingachgook role with relish, years after he had gained fame for his starring role in Of Mice And Men and the classic Universal movie The Wolf Man.

Episode 1 - The Search: Hawkeye and Chingachgook rescue an elderly woman from the clutches of two Indians. She enlists their help in finding her son who was abducted 18 years ago by the same tribe.

Episode 2 - The Delaware Hoax: The Delaware, an Indian tribe with ties to Chingachgook, are framed by white men for murder and robberies they did not commit. Hawkeye sets out to clear the tribe's name.

This television series, based on the classic novel by James Fenimore Cooper, follows the struggles of scout Hawkeye and his companion Chingachgook, who is the last remaining member of the Mohican tribe. Set in New York's Hudson Valley during the French and Indian War in colonial America, HAWKEYE AND THE LAST OF THE MOHICANS takes place in the 1750s. This set contains four episodes, including "The Search," "The Delaware Hoax," "False Witness," and "Hawkeye's Homecoming."

Brothers | Friendships | Television Programs | Television Shows | Based On A Novel
This product is made-on-demand by the manufacturer using DVD-R recordable media. Almost all DVD players can play DVD-Rs (except for some older models made before 2000) - please consult your owner's manual for formats compatible with your player. These DVD-Rs may not play on all computers or DVD player/recorders. To address this, the manufacturer recommends viewing this product on a DVD player that does not have recording capability.


These four episodes are still exciting fare today. Set in New York's frontier during the French and Indian War of the 1750s, the episodes explore an exciting era of America's past too neglected by television and cinema. Although the episodes are very much in the vein of similar "Early American Hero" television staples like Jim Bowie, Davy Crocket, and Daniel Boone, John Hart as Hawkeye is an impressive addition to the catalog. The first episode is included here (filmed in Hollywood) and lists our star as Johnny Hart. I'm hoping the entire series will be issued on DVD!


With the exception of the pilot episode, this series was filmed in Canada, in cooperation with the Canadian Broadcasting Corporation. John Hart
stars as Hawkeye with Lon Chaney, Jr. as Chingachgook. You may think it comical to see Chaney in the role of an Indian, but this
wasn't the first time that he played one . . . remember the public domain staple "Daniel Boone, Trailblazer?" He's actually pretty good in
this series. The show is very much in the vein of Davy Crockett/Jim Bowie/Daniel Boone, so if you like those shows, chances are good that you'll enjoy this series. Alpha has secured some really good looking prints for the 8 episodes included on volumes 1 and 2. They are among Alpha's best looking TV prints and I doubt this series will ever look better than this. There is some scratchy sounding audio on the first episode of Volume 1, however. Volume 1 includes the pilot episode (filmed in Hollywood) and Volume 2 includes an episode with an early appearance by James Doohan of Star Trek fame.

25%off
Hawkeye And The Last of The Mohicans - Volume 5
$5.95 on Sale
Add to Cart
(2)
Film Collectors & Archivists: Alpha Video is actively looking for rare and unusual pre-1943 motion pictures, in good condition, from Monogram, PRC, Tiffany, Chesterfield, and other independent studios for release on DVD. We are also interested in TV shows from the early 1950s. Share your passion for films with a large audience. Let us know what you have.
How to Order
Shipping Rates & Options
International Shipping
Return Policy
Request a FREE Catalog
Order Items by Catalog
View Catalogs Online
Safe Shopping Guarantee
Buy a Gift Certificate
About OLDIES.com
Customer Reviews
Contact Info
Privacy Policy
Send Feedback
Login
Forgot Password?
Sign Out
Email Subscriptions
Redeem Gift Certificate
To place an order or for customer service, call toll-free 1-800-336-4627 or outside the United States, call 1-610-649-7565
Open Monday-Friday: 9am-9pm, Weekends: 11am-7pm (Eastern Time)
Se habla Español! Spanish-speaking representatives available, Monday-Friday: 9am-5pm (Eastern Time)
Portions of this page © 2022 TiVo Corporation. For personal non-commercial use only. All rights reserved.
© 2022 OLDIES.com and its affiliates and partner companies. All rights reserved.