World War II drama about Allied efforts to smuggle out rubber from the Pacific. 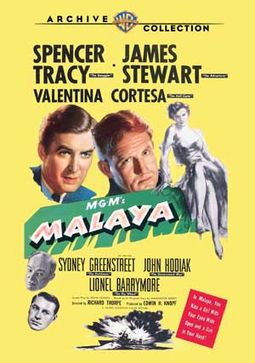 Smuggling landed Carnahan in Alcatraz. Smuggling will be his ticket out. It's World War II, and Uncle Sam needs a man of Carnahan's bold talent to sneak vitally needed rubber out of Japanese-held Malaya.

The rare pairing of James Stewart and Spencer Tracy sparks this tale of an intrigue-filled, true-life wartime operation. Tracy portrays tough, edgy Carnahan. Stewart is sly foreign correspondent and Far East expert John Royer, a man with a plan who tells U.S. officials: "With the right kind of money and the wrong kind of man, I can get that rubber out for you." And with its right kind of stars, this brawny classic gets maximum heroics every moment. Adventure and starpower - Sydney Greenstreet in his final film, Lionel Barrymore and Gilbert Roland - are on the map in Malaya.

Based on a true story, this WWII adventure weaves a tale of danger and intrigue that focuses on the daredevil exploits of some extraordinary men.

Adventure | True Story | War | Theatrical Release
This product is made-on-demand by the manufacturer using DVD-R recordable media. Almost all DVD players can play DVD-Rs (except for some older models made before 2000) - please consult your owner's manual for formats compatible with your player. These DVD-Rs may not play on all computers or DVD player/recorders. To address this, the manufacturer recommends viewing this product on a DVD player that does not have recording capability.