Confessions of a Nazi Spy

The story is a brisk connect-the-dots tale that ties German-American Bund operatives (Francis Lederer, George Sanders and Paul Lukas among others) to Berlin. Chief among those connecting the dots: FBI Agent Edward Renard (Edward G. Robinson). 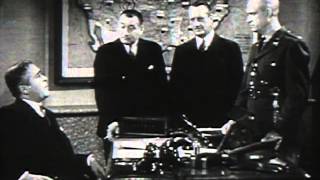 Confessions of a Nazi Spy - Trailer

In the wake of a trial that convicted four Nazi agents of spying against the U.S., Warner Bros. became the first Hollywood studio to fire a salvo at Hitler's Germany. Months before World War II erupted it released this thriller based on revelations that emerged from the trial and other real-life sources.

The story is a brisk connect-the-dots tale that ties German-American Bund operatives (Francis Lederer, George Sanders and Paul Lukas among others) to Berlin. Chief among those connecting the dots: FBI Agent Edward Renard (Edward G. Robinson).

The drama wasn't limited to the screen; production personnel received threats and violence erupted at some screenings. Directed with hard-hitting verve by Anatole Litvak, Confessions of a Nazi Spy struck a nerve in its era. It remains a milestone of filmmaking commitment today.

Bold for its time (just prior to World War II), CONFESSIONS OF A NAZI SPY is an expose of a genuine Nazi espionage ring operating in the United States. Dedicated National Socialist Paul Lukas arrives in America to conduct Bund rallies and enlist German-Americans in the service of Hitler. His rabble-rousing speeches inspire a blue collar worker (Francis Lederer) to join a Bund, and then participate in spy activities. FBI agent Edward G. Robinson is assigned to investigate. Extracting a confession from the not-too-bright Lederer, Robinson traces the espionage activities to Lukas. The Nazi official's notoriety and his undesirability as a security risk compels the German secret police to kidnap Lukas and spirit him back to the Fatherland, presumably to face liquidation. The spy ring is rounded up, but Robinson realizes that this is only the beginning. CONFESSIONS OF A NAZI SPY may seem dated today, but in 1939 it packed a real wallop, especially since most filmmakers of that era chose to ignore the Nazis lest they lose the valuable European market.

Action | Mystery | Spies | War | Nazis | Espionage | Detective | Spy
This product is made-on-demand by the manufacturer using DVD-R recordable media. Almost all DVD players can play DVD-Rs (except for some older models made before 2000) - please consult your owner's manual for formats compatible with your player. These DVD-Rs may not play on all computers or DVD player/recorders. To address this, the manufacturer recommends viewing this product on a DVD player that does not have recording capability.