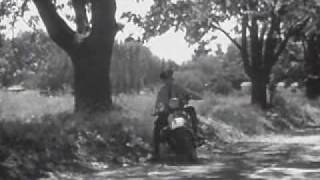 Humphrey Bogart stars as Rip Murdock, a World War II veteran ensnared in a web of crime and conspiracy when his best friend, Johnny Drake (William Prince), disappears en route to Washington, D.C., to receive a war medal. Murdock follows the trail to Drake's hometown in the Deep South, where he finds his friend's body burned beyond recognition at the local morgue. Murdock, determined to find the murderer, begins his own investigation but soon falls for Drake's ex-girlfriend, femme fatale Cory Chandler (Lizabeth Scott). When Murdock finds his first lead dead in his own hotel room, he begins to suspect that Chandler may be a lot more than just a local singer. Directed by acclaimed veteran John Cromwell (SO ENDS OUR NIGHT, ABE LINCOLN IN ILLINOIS), DEAD RECKONING provides sharp and merciless suspense. The dark, winding plot twists in this classic film noir are held together and energized throughout by Bogart's commanding, inimitable screen presence and his paradoxically expressive, world-weary deadpan.

State of The Union (DVD)
$13 Super Savings
Add to Cart