Gary Cooper stars as a man who is driven to rewrite the past in this tale of love and revenge in tobacco country. 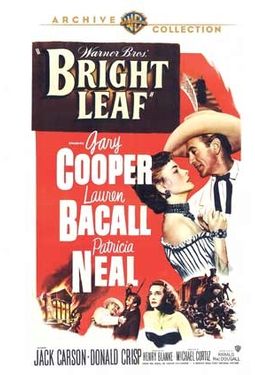 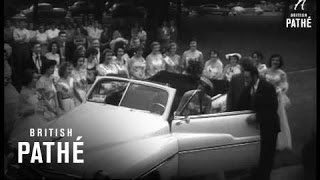 Gary Cooper stars as a man who is driven to rewrite the past in this tale of love and revenge in tobacco country. Michael Curtiz ("Casablanca") directs this story by Robert Wilder ("Flamingo Road"). Featuring an all-star supporting cast, including Oscar-nominee Lauren Bacall ("The Big Sleep," "The Mirror Has Two Faces") and Academy Award-winner Patricia Neal.

BRIGHT LEAF, a sprawling saga of the tobacco industry in North Carolina, began as a novel by Foster Fitzsimmons, a native Carolinian who for many years taught at the University of North Carolina-Chapel Hill's theatre department. The film version of BRIGHT LEAF has been simplified and reshaped to serve as a traditional Gary Cooper vehicle. Cooper stars as tenant farmer Brant Royle, who after being driven from his home town by autocratic tobacco tycoon Major Singleton (Donald Crisp) returns in triumph with a revolutionary cigarette-making machine. Royle's streamlined techniques soon drive Singleton out of business. Margaret Singleton (Patricia Neal), Royle's old flame, agrees to marry him to save her father from ruin--whereupon the Major commits suicide. The vengeful Margaret then does everything she can to destroy Royle. The question remaining: can Brant Royle save himself and find ultimate happiness with his true love, Sonia Kovac (Lauren Bacall)' Also appearing in BRIGHT LEAF are Jack Carson as Royle's flamboyant business partner Chris Malley and Jeff Corey as John Barton, the inventor of the "miracle" cigarette-making apparatus.

Enemies | Death | Romance | Vengeance | Melodrama | Revenge | Romances | Love | Couples
This product is made-on-demand by the manufacturer using DVD-R recordable media. Almost all DVD players can play DVD-Rs (except for some older models made before 2000) - please consult your owner's manual for formats compatible with your player. These DVD-Rs may not play on all computers or DVD player/recorders. To address this, the manufacturer recommends viewing this product on a DVD player that does not have recording capability.

Rachel and the Stranger (Blu-ray)
$20
Add to Cart