It's a Wonderful World

THE HAPPENINGS OF ONE WONDERFUL NIGHT! 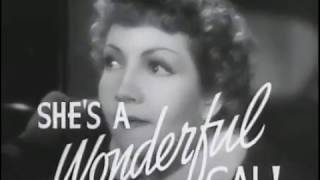 If the idea of James Stewart masquerading as a gangly Boy Scout leader in oversized pants and Coke-bottle glasses makes you laugh, It's a Wonderful World awaits! This wisecracking classic scripted by screwball master Ben Hecht (Twentieth Century, Nothing Sacred, His Girl Friday) stars Stewart and the marvelous Claudette Colbert in their only screen pairing. He's a private eye on the run from a conspiracy rap in a phony murder case. She's a dizzy poet he takes hostage...and takes on the adventure of her life to track down the real killer. Naturally, despite constant peril and the PI's penchant for goofball disguises, romance blooms. Join two iconic stars in a comic world that's wacky, witty and completely wonderful.

In this frothy screwball comedy, Guy Johnson (James Stewart) is a private detective who is dedicated to his job but still quite green and a bit of a bumbler. Guy is hired to keep a close watch on Willie Heyward (Ernest Truex), a footloose millionaire with a habit of getting into trouble. One night, Willie ties one on and somehow ends up accused of murder, with Guy also charged as an accomplice. After the two are convicted, Guy escapes from the train taking him to prison, and he hits the road in hopes of finding evidence that will clear both himself and Willie. En route, Guy encounters Edwina Corday (Claudette Colbert), an eccentric poetess, and essentially abducts her, forcing her to let him use her car and help him as he tries to find the real murderer. But before long, Edwina seems more amused by Guy than threatened, and she falls in love with him as he assumes a bewildering series of disguises (actor, driver, Boy Scout) while trying to find the truth before it's too late. IT'S A WONDERFUL WORLD also features Guy Kibbee, Edgar Kennedy, Sidney Blackmer, and Hans Conried.

Adventure | Escape | Trains | Murder Investigations | Love
This product is made-on-demand by the manufacturer using DVD-R recordable media. Almost all DVD players can play DVD-Rs (except for some older models made before 2000) - please consult your owner's manual for formats compatible with your player. These DVD-Rs may not play on all computers or DVD player/recorders. To address this, the manufacturer recommends viewing this product on a DVD player that does not have recording capability.

The Counterfeit Traitor
$14.50
Add to Cart