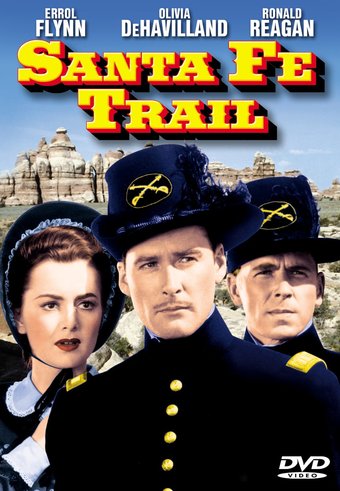 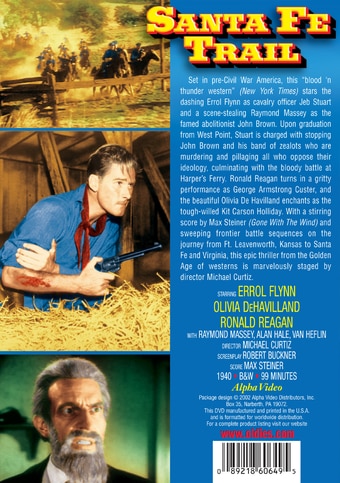 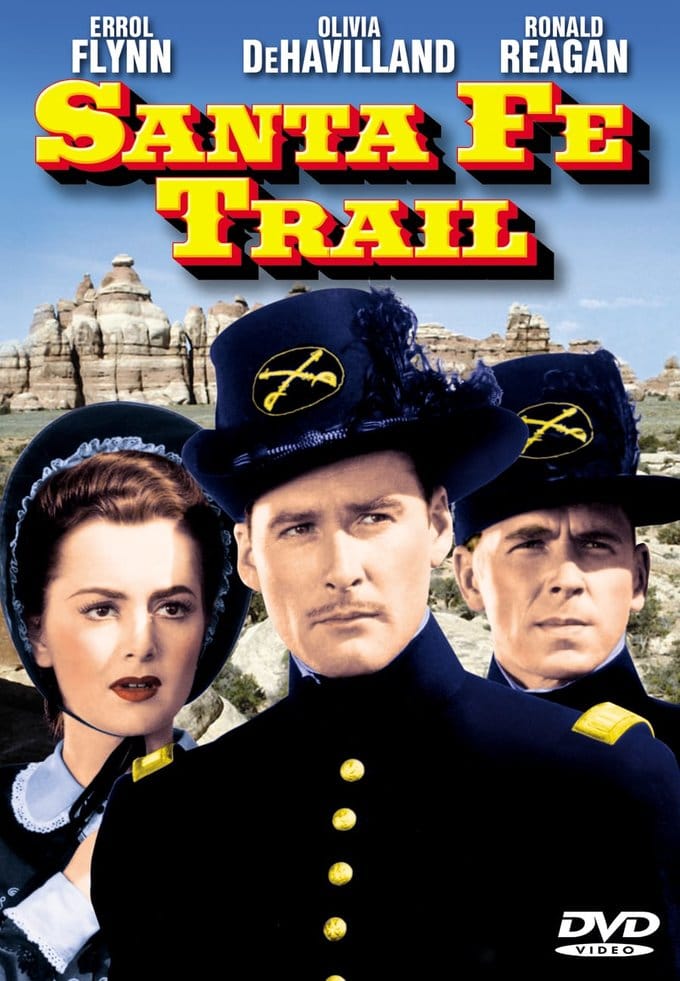 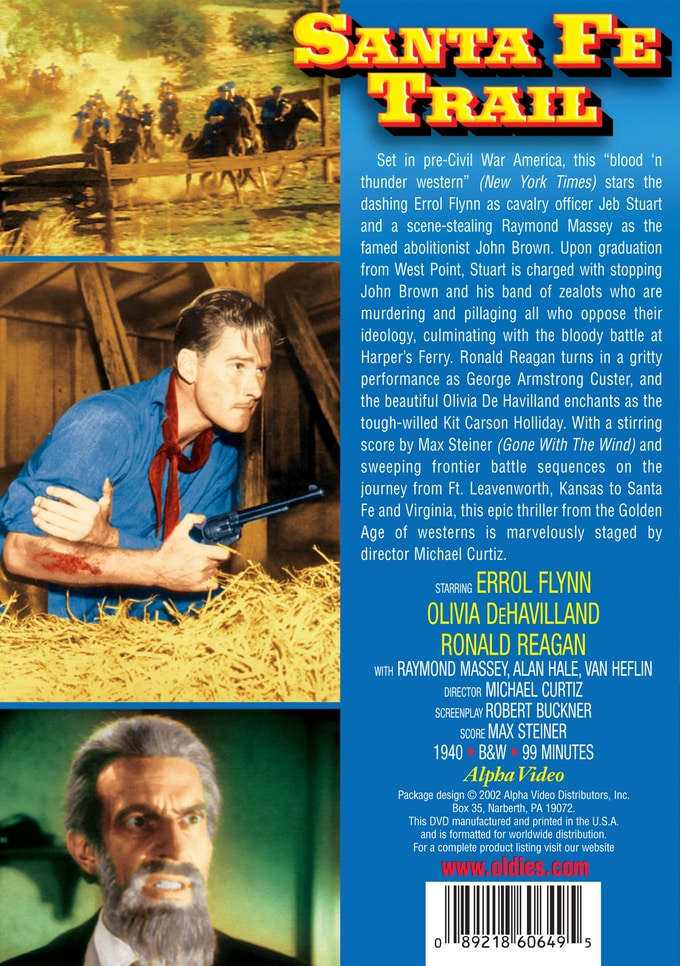 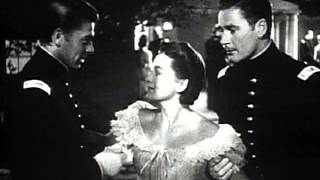 Set in pre-Civil War America, this "blood 'n thunder western" (New York Times) stars the dashing Errol Flynn as cavalry officer Jeb Stuart and a scene-stealing Raymond Massey as the famed abolitionist John Brown. Upon graduation from West Point, Stuart is charged with stopping John Brown and his band of zealots who are murdering and pillaging all who oppose their ideology, culminating with the bloody battle at Harper's Ferry. Ronald Reagan turns in a gritty performance as George Armstrong Custer, and the beautiful Olivia De Havilland enchants as the tough-willed Kit Carson Holliday. With a stirring score by Max Steiner (Gone With The Wind) and sweeping frontier battle sequences on the journey from Ft. Leavenworth, Kansas to Santa Fe and Virginia, this epic thriller from the Golden Age of westerns is marvelously staged by director Michael Curtiz.

SANTA FE TRAIL is a western dealing with the pre-Civil War period of Kansas and John Brown's raids. It depicts the battle of Fort Leavenworth, aka "bloody Kansas," during the days leading up to the civil war. Calvary officers are given the duty of capturing abolitionist John Brown (Raymond Massey) and his crew. Errol Flynn plays West Point cadet J. E. B. Stuart, the man assigned to the dangerous mission, along with George Armtrong Custer (Ronald Reagan), and four other friends who also just graduated from West Point.

Errol Flynn, Ronald Reagan and Olivia de Havilland star in this lofty western about the Cavalry officers responsible for capturing abolitionist John Brown.
As a penalty for fighting fellow classmates days before graduating from West Point, J.E.B. Stuart, George Armstrong Custer and four friends are given a dangerous assignment. They're being sent to Fort Leavenworth (a.k.a "bloody Kansas territory"), where abolitionist John Brown and his posse of sharp-shooting crusaders have camped out. These well-schooled Calvary officers will play a drawn-out game of cat-and-mouse with Brown's brigade -- but the battle at Harper's Ferry is sure to be John Brown's last.

Adventure | History (USA)
This product is made-on-demand by the manufacturer using DVD-R recordable media. Almost all DVD players can play DVD-Rs (except for some older models made before 2000) - please consult your owner's manual for formats compatible with your player. These DVD-Rs may not play on all computers or DVD player/recorders. To address this, the manufacturer recommends viewing this product on a DVD player that does not have recording capability.

Customer Rating:
Based on 5038 ratings.


OK, it's a fun movie to watch, but it's a sample of the pro-South propaganda which Hollywood has been hooked on since THE BIRTH OF A NATION. Van Heflin is a villain because, after all, he wants to abolish slavery! Our hero Jeb Stuart (Errol Flynn) assures us that the South will get around to that on its own if those damned northerners will just quit trying to impose their ways. And so on, and so forth, including frightened darkies freed by John Brown (played as crazed fanatic by Raymond Massey) who would rather go back to slavery. Better not think too hard, for any decent human being would choke on the politics of this attractive adventure film.


This is a super action movie. Van Heflin is dynamite in his role as the West Point outcast who has personal and philosophical scores to settle...especially with Errol Flynn. Flynn pretty much single-handedly saves Kansas with Reagan's able assistance. Raymond Massey is riveting as John Brown. The pursuit of Brown undertaken by our stalwart heroes was well-conceived and executed in the film. (As was John Brown.) While the goin's-on don't bear much relationship to actual events, the story stands firmly on its own. The characters are lively and believable. Lots of horses, gunfights, fires, fist fights and stage blood. This one'll keep yuh glued to yer saddle.