Bela Lugosi, at the height of his career, plays a dual role in this vintage murder mystery involving deadly television transmissions. 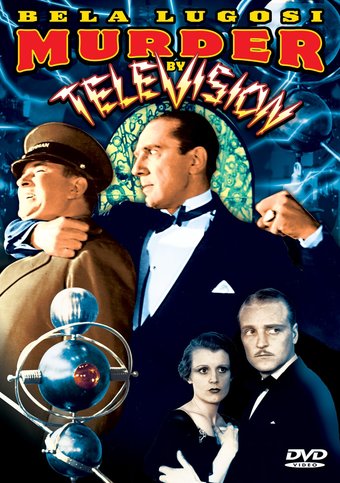 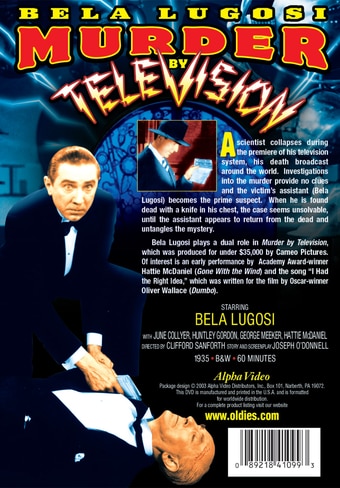 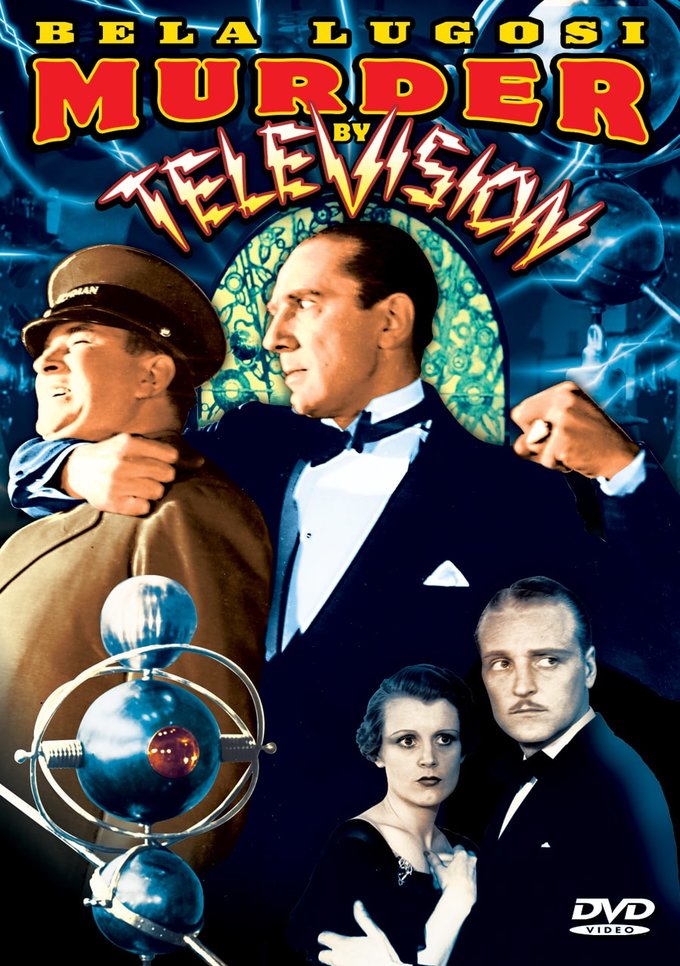 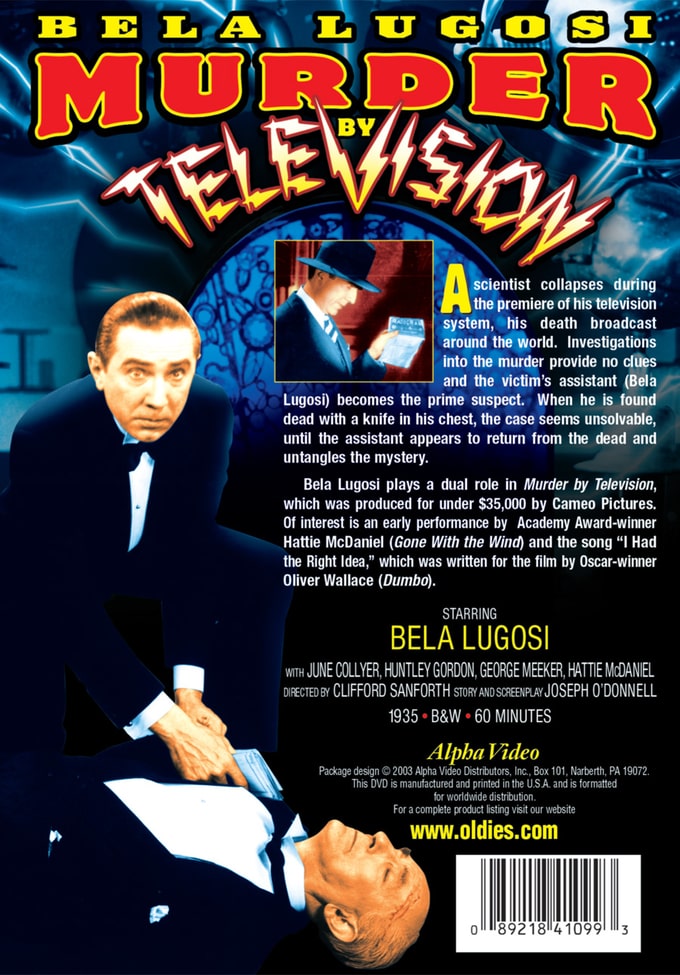 "The less we know of the details of what you're doing, the better. We want results." (Broadcasting executive)
"Oh Lawdy, Lawdy. I knows I seen a ghost." (Isabella)
"Earlier tonight, in view of thousands, Mr. Houghland was killed by his own invention. His killing was not accidental. It was a deliberately conceived, cold-blooded execution, cleverly maneuvered so as to give the murderer a perfect alibi." (Arthur Perry)
"Even though the eyes may see, the mind will not believe." (Perry)

A scientist collapses during the premiere of his television system, his death broadcast around the world. Investigations into the murder provide no clues and the victim's assistant (Bela Lugosi) becomes the prime suspect. When he is found dead with a knife in his chest, the case seems unsolvable, until the assistant appears to return from the dead and untangles the mystery. Bela Lugosi plays a dual role in Murder by Television, which was produced for under $35,000 by Cameo Pictures. Of interest is an early performance by Academy Award-winner Hattie McDaniel (Gone With the Wind) and the song "I Had the Right Idea," which was written for the film by Oscar-winner Oliver Wallace (Dumbo).

Spies go after the inventor of a television device in order to obtain the plans. Bela Lugosi plays two roles in this vintage suspense thriller.

The inventor of television mysteriously dies during his first broadcast. Then, in the middle of the investigation by the chief of police, the inventor's assistant is killed. A surprise visit from a federal agent puts the investigation back on track and uncovers the murderer.

Customer Rating:
Based on 731 ratings.


Okay, I'm not a huge Lugosi fan. And maybe I wasn't in the right frame of mind to see this one. But I'm not gonna knock any of these old films since Alpha is good enough to re-release them. God bless them for making these movies available to home audiences, & bless those folks out there trying to salvage the ones which are disintegrating.


Once TV was considered the super product of the future and the fact that it could be used as the main theme in a murder isn;t surprising. Bela Lugosi's in it. That's not a bad thing. He was in a lot worse films.


Everyone is quick to point out that Bela Lugosi plays a dual role in this 1935 thriller that is largely ignored by many archivists. That is doing a large injustice to the people who have not yet seen this film because it gives away a climactic plot twist. Oh well, Bela is not the killer anyway so there are still some surprises to be had in this movie.
Back when this movie was made TV was still the stuff of science fiction movies. (In fact I had an uncle who recalled that back in 1946 the television only came on for 45 minutes a night and only 3 nights a week; but that is another story entirely.) Bela plays Arthur Perry, a man trying to get the plans for a new type of television transmitter away from its inventor; and if he cannot buy them he wil get them by a less honest method! The inventor gives a party at his home to show off his device to potential investors. Don't expect the usual "short fired in a dark room" cliche, this murder is televised and no gunshot is heard, the victim just drops over dead! Police seal the house and everyone is soon at each others throats as they realise there is a killer among them! But who is the mysterious murderer and how did he do it? And how is it possible that Bela seems to be in 2 places at once? Well, you know the answer to that question already but I challenge you to figure out who the killer is!
Also in the cast are Henry Hall who would appear with Bela again in movies like THE APE MAN and VOODOO MAN (both 1944). Watch also for Hattie McDaniel who would go on win an Academy Award for her role in GONE WITH THE WIND (1939) and Huntley Gordon who always seemed to play unlikable snobs and also appeared in MR. WONG IN CHINATOWN (1939) and PHANTOM OF CHINATOWN (1944).


A very enjoyable little mystery film with a cool, early television twist! This would make a good double bill with INTERNATIONAL HOUSE, particularly as they both feature Bela Lugosi. The print is a bit rough on this one; it is fairly worn and has a few unfortunate splices. Still, nobody else is rushing to release interesting old films like this one so I applaud Alpha Video for their efforts!