This mystery film is one of the rarest and most interesting of Monogram's productions. On a dark-rainy night a priceless gem is delivered to a sinister house. 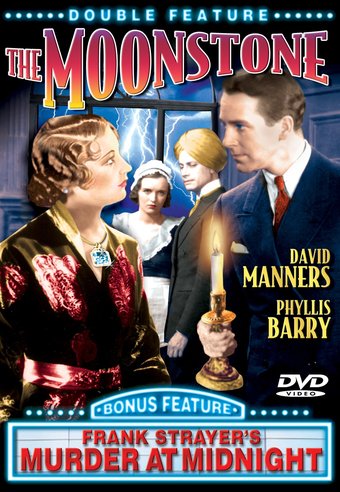 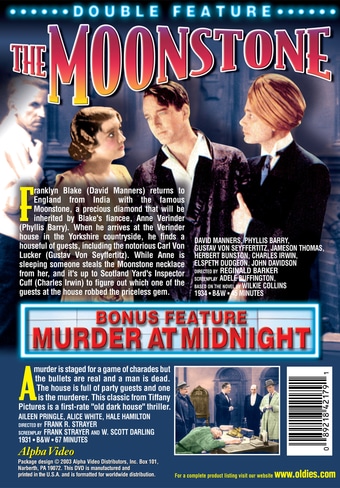 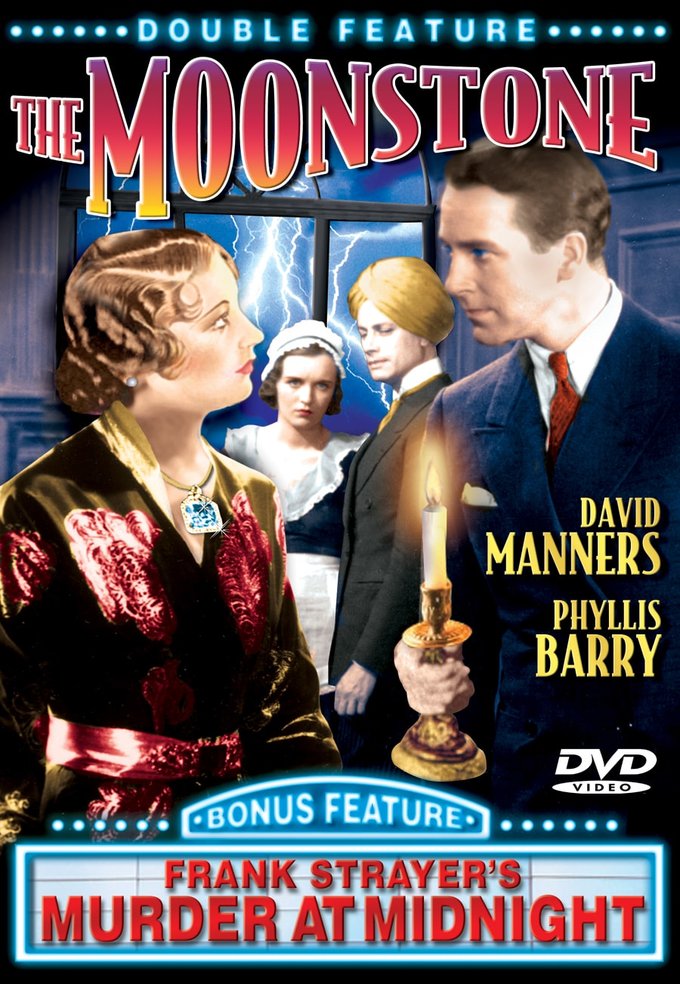 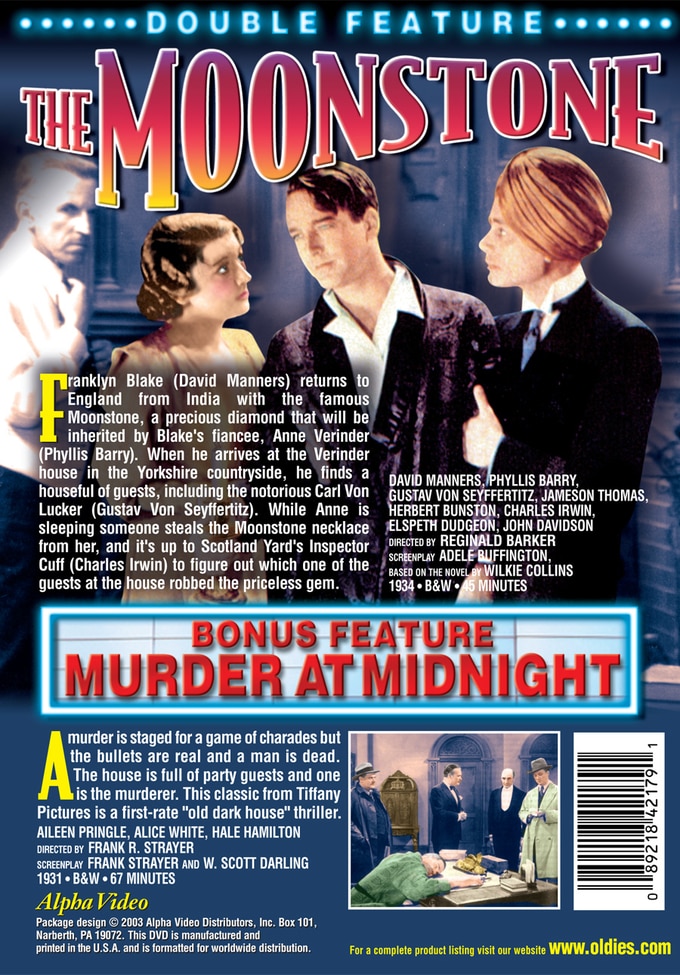 The Moonstone (1934; B&W 45 Minutes): Franklyn Blake (David Manners) returns to England from India with the famous Moonstone, a precious diamond that will be inherited by Blake's fiancee, Anne Verinder (Phyllis Barry). When he arrives at the Verinder house in the Yorkshire countryside, he finds a houseful of guests, including the notorious Carl Von Lucker (Gustav Von Seyffertitz). While Anne is sleeping someone steals the Moonstone necklace from her, and it's up to Scotland Yard's Inspector Cuff (Charles Irwin) to figure out which one of the guests at the house robbed the priceless gem.

Murder At Midnight (1931; B&W 67 Minutes): A murder is staged for a game of charades but the bullets are real and a man is dead. The house is full of party guests and one is the murderer. This classic from Tiffany Pictures is a first-rate "old dark house" thriller.

Based on a novel by Wilkie Collins about a dashing young man who takes shelter from a storm in a giant mansion. With him he has a precious gem from a temple in India, and before the night is over a whole house full of sinister guests are suspected of stealing it.

Suspense | Thriller | Vintage | Jewels
This product is made-on-demand by the manufacturer using DVD-R recordable media. Almost all DVD players can play DVD-Rs (except for some older models made before 2000) - please consult your owner's manual for formats compatible with your player. These DVD-Rs may not play on all computers or DVD player/recorders. To address this, the manufacturer recommends viewing this product on a DVD player that does not have recording capability.


Well, any resemblance between this story and Wilkie Collins novel is a bit of a stretch but, all in all, it's not all that bad. It's a little creaky with age but aren't we all?


This Disc has two winners on it.

The Moonstone is one of Mascot Studios attempts to adapt great works of literature for the screen. Its the same drive that brought the horrible Jane Eyre with Colin Clive into existance. However, unlike that terrible film this one is an excellent, if somewhat creaky mystery, that is hampered by a brief, 45 minutes, running time. The problem is that by the time the stage is set, the characters introduced and the crime occurs we are left with almost no time to solve the mystery and so are sent racing to the end. Its a bit disappointing. Thankfully there is another movie to go.

Murder at Midnight is a super little film about a murder that happens during a party.What was at first was thought to be real turns out to be fake...then again perhaps not as one guest is most certainly dead. While not possessing anything that makes it stand out from the rest of the old dark house mystery crowd, other than quality, this film is a grand viewing experience as suspects and detectives go through their paces. Definitely recommended, especially when linked with The Moonstone.


Both films offered here are "verry verry British" and will keep you entertained as only these early 1930's whodunnits can do.
"The Moonstone" has top billing but "Murder at Midnight" is my favorite of the two. Both movies are starting to show their age in video and audio quality, but just turn up the volume a bit and sit back and enjoy.
Alpha Video's artwork on the DVD box is wonderful as usual.