Never give a saga an even break! 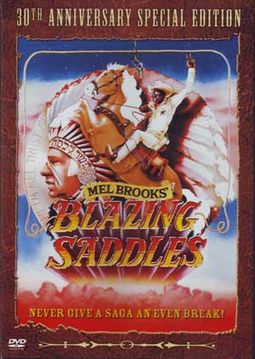 "It's not Hedy. It's Hedley. Hedley Lamarr"--Hedley Lamarr (Harvey Korman)
"What the hell are you worried about' This is 1874. You'll be able to sue her."
- Governor Lepetomane (Mel Brooks)
"My name is Jim. But most people call me...Jim."
- Jim (Gene Wilder) to Sheriff Bart (Cleavon Little)
"Yeah, but I shoot with this hand."
- Jim
"If you shoot him, you'll just make him mad."
- Jim to Sheriff Bart, about Mongo (Alex Karras)
"Excuse me while I whip this out."
- Sheriff Bart
"I got it! I know how we can run everybody out of Rock Ridge...We'll kill the firstborn male child of every household."--Taggart (Slim Pickens)
"Too Jewish."
- Lamarr
"Badges' We don't need no stinkin' badges!"
- Mexican bandit
"You'd do it for Randolph Scott."--Sheriff Bart
"Randolph Scott!"
- the townspeople
"I didn't get a 'harrumph' out of that guy!"--Governor Lepetomane
"Give the governor a 'harrumph!'"--Lamarr
"Harrumph!"--Reporter
"You watch your ass."
- Governor
"Can't you see that's the last act of a desperate man'"--Sheriff Bart
"We don't care if it's the first act of HENRY V, we're leaving!"
- villager

A madcap spoof of the classic Hollywood Western, BLAZING SADDLES is also one of the most gleefully anti-P.C. films ever produced by a major studio. When the sheriff of a small frontier town is killed, convict Bart (Cleavon Little) is appointed the first black sheriff of all-white Rock Ridge by the evil Hedley Lamarr (Harvey Korman), who hopes this will chase the townspeople from their homes. The naive Sheriff Bart soon catches on, realizing from the less than cheery welcome that the townspeople (who all seem to be named Johnson) aren't prepared for a black sheriff and that he was never meant to succeed at all. Enlisting the help of the sensitive town drunk (Gene Wilder), formerly the Waco Kid, Bart embarks on a plan to save Rock Ridge. A scathing spoof that deals with racism, sexism, and bodily functions, BLAZING SADDLES offers a contrast between picture and words that is shocking, subversive, and hilarious. Director Mel Brooks makes two memorable appearances--as both the sleazy governor and a Yiddish-speaking Sioux Indian chief--while Madeline Kahn does a sidesplitting Marlene Dietrich imitation as the town floozy. Featuring fabulous comic turns by Alex Karras and Slim Pickens, BLAZING SADDLES is raunchy, lovable, and uproarious.