And now! At Last! Another film completely different from some of the other films which aren't quite the same as this one is. 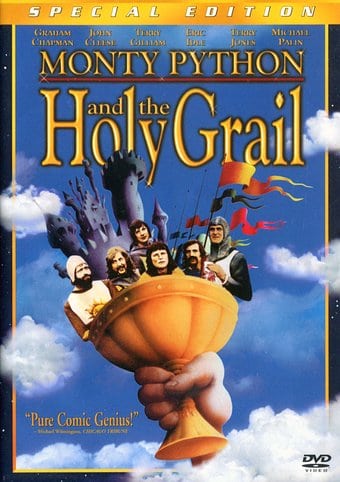 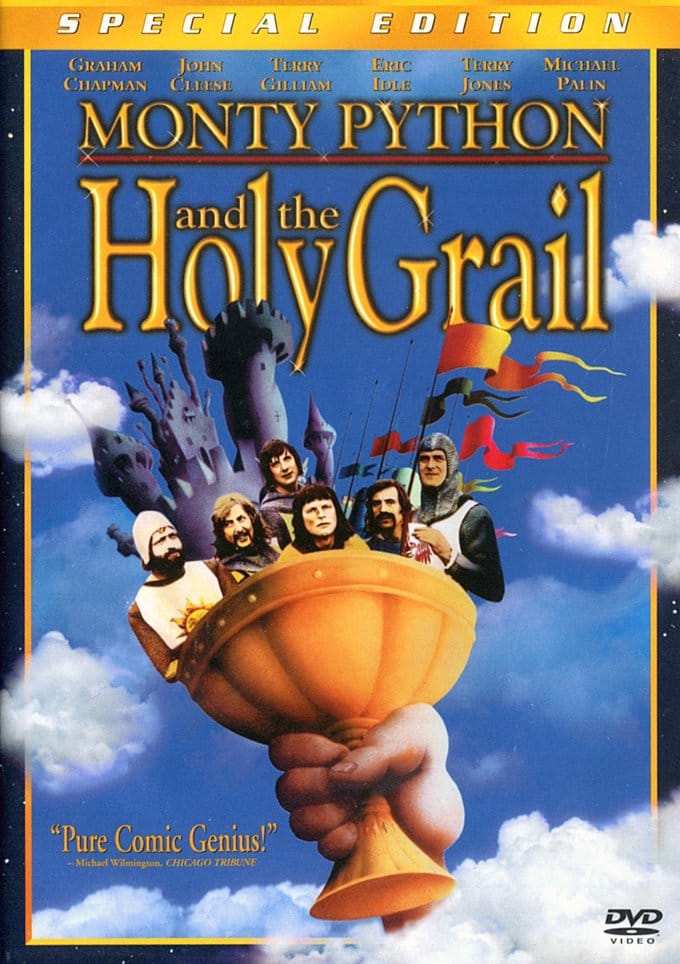 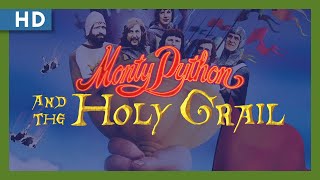 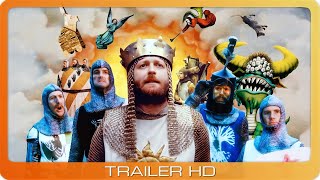 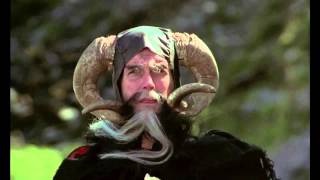 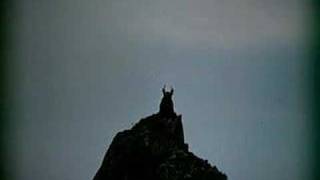 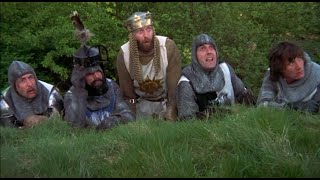 Adam Rifkin on MONTY PYTHON AND THE HOLY GRAIL (Featurette)

"It's just a flesh wound."
- The Black Knight (John Cleese) to King Arthur (Graham Chapman), after Arthur has cut off his arms
"I don't wanna talk to you no more, you empty-headed animal food trough wiper! I fart in your general direction! Your mother was a hamster and your father smelt of elderberries!"
- French Guard (John Cleese) to Arthur
"Sir Launcelot had saved Sir Galahad from almost certain temptation."
- Narrator (Michael Palin), upon Sir Galahad (Michael Palin) having been "rescued" from the castle of virgins
"We are the Knights Who Say...'Ni'!"
- Head Knight (Michael Palin) to Arthur
"One day, lad, all this will be yours!"--Father (Michael Palin)
"What, the curtains'"
- Prince Herbert (Terry Jones)
"We are now...no longer the Knights Who Say 'Ni.'"--Head Knight
"Ni! Shh!"--Knights of Ni
"Shh! We are now the Knights Who Say 'Ecky-ecky-ecky-ecky-pikang-zoop-boing-goodem-zoo-owli-zhiv.'"
- Head Knight
"Look, that rabbit's got a vicious streak a mile wide! It's a killer!"
- Tim the Enchanter (John Cleese)
"And the Lord spake, saying, 'First shalt thou take out the Holy Pin. Then, shalt thou count to three. No more. No less. Three shalt be the number thou shalt count, and the number of the counting shall be three. Four shalt thou not count, nor either count thou two, excepting that thou then proceed to three. Five is right out. Once the number three, being the third number, be reached, then, lobbest thou thy Holy Hand Grenade of Antioch towards thy foe, who, being naughty in My sight, shall snuff it.'"
- Second Brother (Michael Palin)

This classic Monty Python comedy, directed by Pythons Terry Gilliam and Terry Jones, is a hilarious send-up of the grim circumstances of the Middle Ages as told through the story of King Arthur and framed by a modern-day murder investigation. When the mythical king of the Britons leads his knights on a quest for the Holy Grail, they face a wide array of horrors, including a persistent Black Knight, a three-headed giant, a cadre of shrubbery-challenged knights, the perilous Castle Anthrax, a killer rabbit, a house of virgins, and a handful of rude Frenchmen.

In addition to the set pieces, the film also includes the same kind of surreal animation that Gilliam contributed to the television series. Throughout the irreverent adventures, the Python crew eschews realism in favor of anachronistic social satire, a recipe it later returned to in the 1979 biblical farce MONTY PYTHON'S LIFE OF BRIAN. Melding the ridiculous with the sublime, the film quickly inspired a cult following, generated a host of quotes, and even inspired a computer game 20 years after its release. The numerous songs and hysterical vignettes are sidesplittingly unforgettable.

King Arthur and his knights venture into medieval England in search of the elusive Holy Grail in this riotous parody that takes on the Arthurian legend, chivalry, movie epics, and bunny rabbits. Terry Gilliam's irreverent comedy, featuring the Monty Python troupe in many memorable roles, is very simply one of the funniest films ever made. Graham Chapman, Michael Palin, Terry Jones, John Cleese, Eric Idle, and Gilliam successfully transfer their television success to the big screen, laying the groundwork for a series of hysterical farces that would follow.