No Time for Sergeants 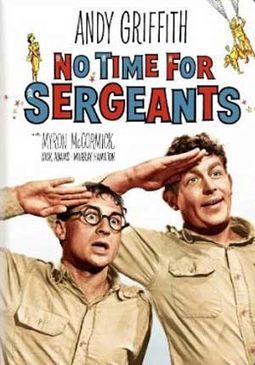 Georgia farm boy Will Stockdale is about to bust with pride. He's been drafted. Will's ready. But is Uncle Sam ready for Will? In No Time for Sergeants, Andy Griffith is certifiably funny in the role that clinched his stardom. Wearing a friendly, wide grin, he ambles into the U.S. Air Force - and lots of folks'll never be the same. They include pint-sized Ben (Nick Adams), big-city bruiser Irvin (Murray Hamilton) and a jittery aptitude tester (Don Knotts). Finally, there's Sgt. Orville King (Myron McCormick), a don't-rock-the-boat old-timer driven crazy by Will's gee-whiz efforts at friendship. Griffith, McCormick and Knotts reprise their winning performances from No Time for Sergeants' smash Broadway run. Breezily directed by the veteran Mervyn LeRoy (Mister Roberts), it's definitely time for entertainment!

Star Andy Griffith's comedic timing is perfect in a role that helped make him a national celebrity. Griffith is Will Stockdale, a country bumpkin who is drafted into the air force during the cold war. Sergeant King (Myron McCormick) is a lifer pleased with the ease and repetition of his path, which ends abruptly with the arrival of the naive Southerner. King fumes and schemes in an effort to control the company damage that derives from Stockdale's bumblings and terminal curiousity. The company psychiatrist proves no match for Stockdale's backwoods wisdom, and death itself is defeated when Stockdale shows up to his own funeral in one of the funniest scenes in the film. Griffith's comic rendering of Stockdale is surpisingly three-dimensional, combining intelligence and warmth with bizarre misconceptions about his place in the world as an army inductee. The supporting cast is also excellent, including Don Knotts, Nick Adams, Benny Baker, and Jamie Farr.

Customer Rating:
Based on 1214 ratings.


I thought I'd seen all the good movies from the past, but somehow this one passed me by. I saw it on TV for the first time a few months ago, and soon after I decided I had to buy it. The way Andy Griffith talks, the one-liners, the story...it's all so funny and comes together so well. I think Andy Griffith plays the part so well because he first played it on Broadway years earlier. Definitely recommended to anyone who needs a good laugh or wants to become a P.L.O (Permanent Latrine Orderly).