Around the World Under the Sea G

Apocalyptic tidal waves caused by earthquakes threaten to destroy the world's coastal cities, and the fate of the earth is in the hands of six scientists. 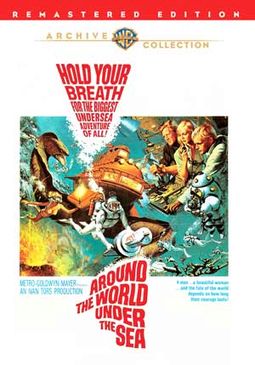 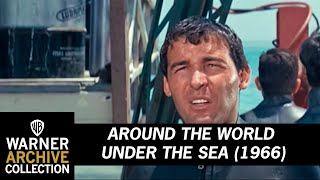 Around the World Under the Sea (Preview Clip) (Trailer) 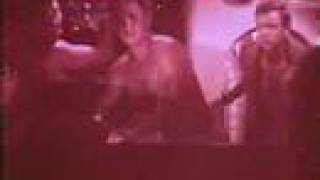 "Around the world under the sea" - trailer

For a screen adventure bubbling with excitement, take the dive with Shirley (Goldfinger) Eaton, schemer David McCallum, misanthrope Keenan Wynn and the dazzling denizens of the deep in this Ivan Tors (Flipper) production. Lloyd Bridges stars as the leader of a perilous deep sea mission. Apocalyptic tidal waves caused by earthquakes threaten to destroy the world's coastal cities, and the fate of the earth is in the hands of six scientists. In its state-of-the-art nuclear powered submarine, the intrepid team confronts all the wonders and terrors of the deep: rock formations that are both beautiful and treacherous; a giant moray eel; and a spouting volcano sucking them into its fiery crater. Filmed in the Great Barrier Reef, Florida and the Bahamas, Around the World Under the Sea features spectacular underwater photography and special effects.

Enormous tidal waves caused by earthquakes threaten coastal cities across the globe, and the fate of millions rests in the hands of six scientists. They must plant earthquake detectors along the ocean floor before tragedy strikes again.

Disaster | Science-Fiction | Suspense | Thriller
This product is made-on-demand by the manufacturer using DVD-R recordable media. Almost all DVD players can play DVD-Rs (except for some older models made before 2000) - please consult your owner's manual for formats compatible with your player. These DVD-Rs may not play on all computers or DVD player/recorders. To address this, the manufacturer recommends viewing this product on a DVD player that does not have recording capability.