They tried to leave the golden city with the most valuable prize of all - their lives! 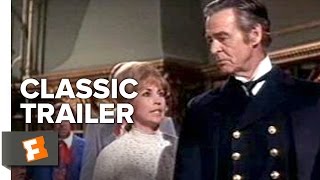 Oscar-nominee Robert Ryan ("The Wild Bunch," "Crossfire") plays Captain Nemo, the infamous submarine captain. The Captain rescues six shipwreck survivors and brings them to his underwater fortress, where they may be trapped for the rest of their lives. Nanette Newman ("The Wrong Box") and Chuck Connors ("Soylent Green," "Old Yeller") co-star in this fantasy-adventure. Enjoyable for the entire family. Directed by Oscar-winner James Hill.

CAPTAIN NEMO AND THE UNDERWATER CITY thrusts several "name" actors into the specialized world of Jules Verne. Six 19th-century shipwreck victims are rescued by a modernistic submarine. The skipper is Captain Nemo (Robert Ryan), who had not died at the end of 20,000 LEAGUES UNDER THE SEA as viewers had been led to believe. Instead, he has installed a fantastic underwater city, using this subterranean metropolis as a base of operations for his war against mankind. The ambitions of the screenwriters and director are defeated by the tackiness of the film's model and miniature work. CAPTAIN NEMO AND THE UNDERWATER CITY represented MGM's first Jules Verne epic since its 1929 spectacular MYSTERIOUS ISLAND.

Adventure | Science-Fiction | Escape | Submarines | Boats
This product is made-on-demand by the manufacturer using DVD-R recordable media. Almost all DVD players can play DVD-Rs (except for some older models made before 2000) - please consult your owner's manual for formats compatible with your player. These DVD-Rs may not play on all computers or DVD player/recorders. To address this, the manufacturer recommends viewing this product on a DVD player that does not have recording capability.

Master of the World
$19
Add to Cart

Chains of Gold
$19
Add to Cart