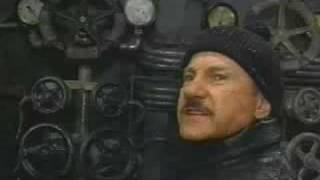 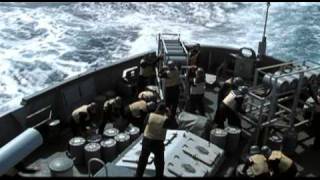 Faithful to the conventions of the World War II genre, Mostow's (BREAKDOWN) submarine thriller pays earnest homage to the pluck and determination of ordinary people forced to overcome extraordinary odds. The mostly young and inexperienced crew of the S-33 is deployed on a top secret, high-priority mission to intercept a disabled German u-boat (the titular U-571) and capture the ship's encryption system--the Enigma--in order to crack the Nazi's communication codes and hasten an allied victory in the North Atlantic. Racing against a German rescue effort, the S-33 stages a daring raid on the U-571. But after capturing the U-571, the Americans find themselves its prisoner as they must pilot the leaky, disabled vessel through hostile enemy waters. McConaughey (EDTV, DAZED AND CONFUSED) leads a strong cast (Keitel - HOLY SMOKE, Paxton - A SIMPLE PLAN) in this fast-paced, tense, submarine adventure.

Jonathan Mostow's (BREAKDOWN) World War II submarine thriller about a crew of inexperienced American mariners forced to pilot a disabled German U-boat through hostile waters delivers plenty of action while paying homage to such war genre greats as DAS BOOT and DESTINATION TOKYO. Matthew McConaughey (EDTV) leads the rag tag American crew as Lt. Andrew Tyler, a young officer determined to prove himself a capable leader after being denied command of his own ship. His fellow seamen include Jon Bon Jovi (MOONLIGHT AND VALENTINO), Bill Paxton (A SIMPLE PLAN) and a cross-section of American society, featuring a hot-headed Brooklyner, an earnest farm boy, a wise black cook, a pack of fresh-faced young sailors, and Harvey Keitel as a salty old sea dog. Working with a lean plot, Mostow employs Oliver Wood's (FACE/OFF) detailed, claustrophobic cinematography and an exceptional sound design to create a series of engaging and genuinely tense action sequences that take the rickety submarine to crushing depths in order to outrun German attacks. While his attention to hard historical facts may be a bit leaky, Mostow's ability to sustain suspense rewards viewers with a tight genre piece with no shortage of action or good old American patriotism.