Bette Davis and Margaret Lindsay portray stepsisters from a society family in the City by the Bay. One sister is amiable, upright, upholding the family name. The other is volatile, risk-taking, and hovering too close to high-living lowlifes. 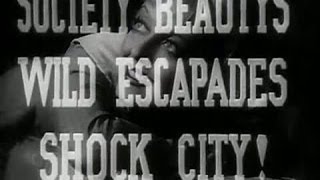 Bette Davis and Margaret Lindsay portray stepsisters from a society family in this atmospheric tale of crime and punishment in the City by the Bay. One sister is amiable, upright, eager to uphold the family name. The other is volatile, risk-taking, a moth hovering too close to the flame of high-living lowlifes who launder stolen bonds. Care to guess which actress plays her? Bette Davis was a little more than three weeks away from the release of her breakthrough portrayal in Of Human Bondage and the excitement surrounding her was electric when she played the reckless sister in Fog over Frisco. That excitement flashes again and again in a trim, snappy gem Davis would later recall with much fondness.

Cited by film historian William K. Everson as one of the fastest-moving crime melodramas of the 1930s (if not the fastest) FOG OVER FRISCO still manages to leave viewers breathless. Top-billed Bette Davis plays giddy heiress Arlene Bradford, whose perverse fascination with gangsters gets her mixed up in a stolen-securities scheme. Arlene's more sensible sister Val (Margaret Lindsay) tries to keep her out of trouble, but this proves impossible. Entering into the fray are hotshot society reporter Tony (Donald Woods) and goofy photojournalist Izzy (Hugh Herbert), who like Val get in over their heads when they stumble upon the body of the murdered Arlene. The identity of the killer remains a well-concealed secret until Izzy, of all people, stumbles across a vital clue. Things really begin to accelerate when Val is kidnapped by Arlene's gangster cohorts (who, interestingly enough, are very reluctant to take her prisoner and do so only when there's no other option!), leading to a mile-a-minute rescue and hasty plot wrap-up. Among the many good guys, bad guys and red herrings are Alan Hale as an Irish cop, Robert H. Barrat as a butler who isn't a butler, and Henry O'Neill as a gosh-knows-what who may be the murderer. Though physical action is at a minimum, FOG OVER FRISCO is kept constantly on the move by director William Dieterle, using every cinematic trick and optical effect (wipe dissolves, iris-outs, swish-pans etc.) at his disposal. The film was less effectively remade as SPY SHIP in 1942.

Mystery | Thriller | Melodrama | Crime | Gangsters | Kidnapping | Newspapers | Weapons
This product is made-on-demand by the manufacturer using DVD-R recordable media. Almost all DVD players can play DVD-Rs (except for some older models made before 2000) - please consult your owner's manual for formats compatible with your player. These DVD-Rs may not play on all computers or DVD player/recorders. To address this, the manufacturer recommends viewing this product on a DVD player that does not have recording capability.

Once Upon a Time in America (Extended Director's Cut)...
$8.70 Super Savings
Add to Cart