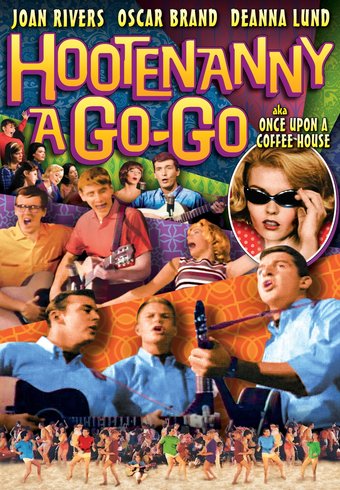 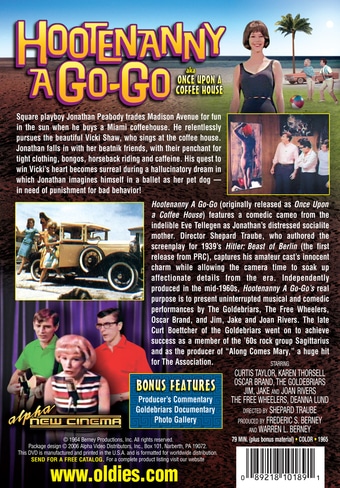 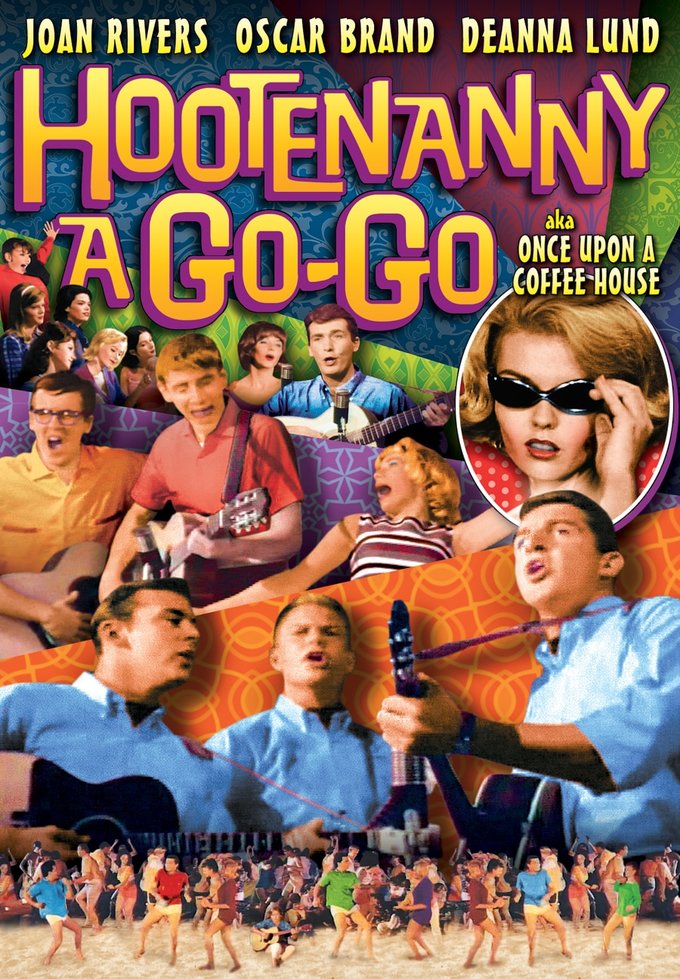 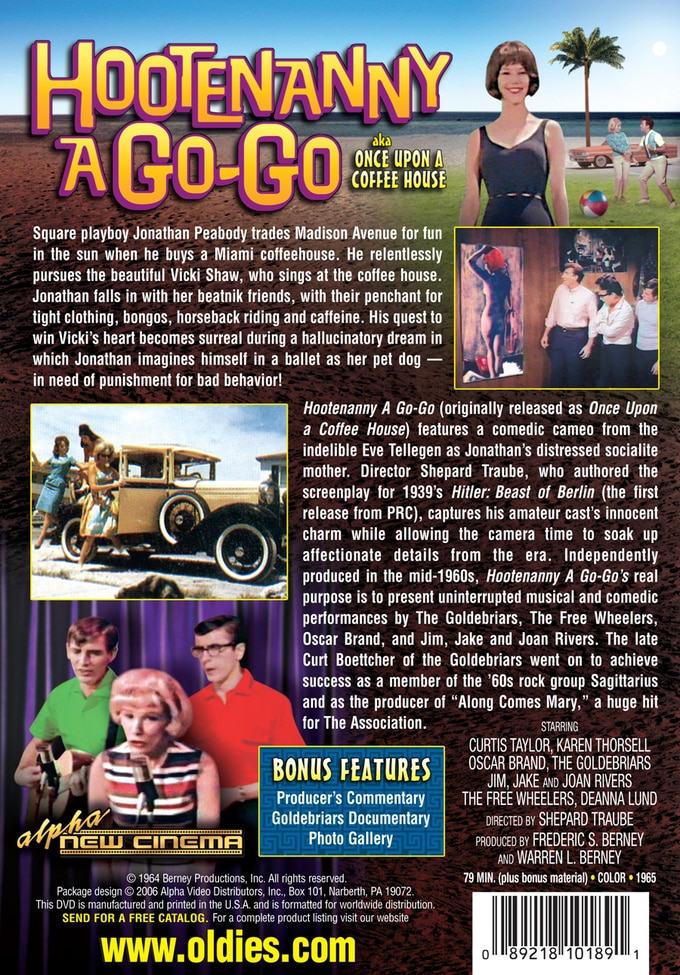 Square playboy Jonathan Peabody trades Madison Avenue for fun in the sun when he buys a Miami coffeehouse. He relentlessly pursues the beautiful Vicki Shaw, who sings at the coffee house. Jonathan falls in with her beatnik friends, with their penchant for tight clothing, bongos, horseback riding and caffeine. His quest to win Vicki's heart becomes surreal during a hallucinatory dream in which Jonathan imagines himself in a ballet as her pet dog - in need of punishment for bad behavior!

Hootenanny A Go-Go (originally released as Once Upon a Coffee House) features a comedic cameo from the indelible Eve Tellegen as Jonathan's distressed socialite mother. Director Shepard Traube, who authored the screenplay for 1939's Hitler: Beast of Berlin (the first release from PRC), captures his amateur cast's innocent charm while allowing the camera time to soak up affectionate details from the era. Independently produced in the mid-1960s, Hootenanny A Go-Go's real purpose is to present uninterrupted musical and comedic performances by The Goldebriars, The Free Wheelers, Oscar Brand, and Jim, Jake and Joan Rivers. The late Curt Boettcher of the Goldebriars went on to achieve success as a member of the '60s rock group Sagittarius and as the producer of "Along Comes Mary," a huge hit for The Association.

15%off
Gingerdead Man 2: Passion of the Crust
$11 Super Savings
Add to Cart

Customer Rating:
Based on 63 ratings.

You've got to be kidding Movie Lover: Uncle Walter from Rehoboth -- October, 9, 2007


This is one of the worst films I have ever seen and I like "Isthar". Obsolutely corn-ball, silly and a waste of time! I'll bet this is one that the actors didn't put on their resumes. You should probably buy it just to see for yourself.


HOOTENANNY A GO-GO is a rare treat, a long-lost regional musical melodrama capturing that most beloved cultural artifact - the folk music coffeehouse scene of the early 1960s. Kudos to Alpha New Cinema for lovingly restoring this regional obscurity for a new generation to enjoy. Filmed in Miami, Florida, HOOTENANNY chronicles the travails of a local coffeehouse owner, his girlfriend, and all his pals and cohorts who struggle to make the scene in the local music business. Tied to this is a curious subplot about a fine art theft. Most magical are the many musical numbers, including the Goldbrairs and Jim, Jake and Joan (with a young Joan Rivers!). The film captures the era perfectly, and considering that according to the producers, it was filmed for under $50,000 (!), the film is well-scrubbed and wholly professional-looking. Amongst the many joys of this little gem are an animated credits sequence with a gorgeous theme song, a swinging night-time beach party, bizarre comic relief segments, a surreal dream sequence featuring our hero dressed in a teddy bear suit (!?!), and even a detour into light fantasy via a diabolical expresso machine. Also look for a cameo by stunning young beauty Deanna Lund, soon to be a TV superstar. The special edition Alpha DVD features an audio commentary by the producers, as well as the original credits sequence (as ONCE UPON A COFFEEHOUSE). HOOTENANNY A GO-GO is a wonderful time capsule of an innocent era long gone, a must-have for folk music lovers, movie musical buffs and collectors of rare independent cinema.