Everything you've heard is true... 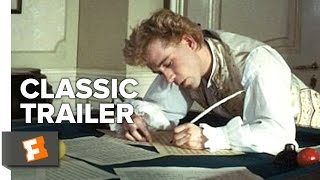 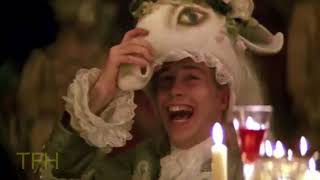 In a lavish 18th century parlor in Austria, an elderly man is found, by his servant, with his throat slashed. The wound is self-inflicted, and the man is the little-known composer Salieri (F. Murray Abraham), contemporary and adversary of the now-famed, but once reviled, composer Wolfgang Amadeus Mozart (Tom Hulce). Later, from his cell in an insane asylum, Salieri tells a priest (Herman Meckler) the story of his association with Mozart, confessing that he actually killed the brilliantly gifted but troubled young man. Based on the award-winning play by Peter Shaffer, Milos Forman's riveting, brilliant, Oscar-winning AMADEUS is a fictionalized account of the real-life mysterious death of Mozart. Abraham, in the role that won him the Best Actor Oscar, is the celebrated court composer to Joseph II (Jeffrey Jones)--his confidence and religious dedication shaken when he meets the boorish 26-year-old Mozart as he chases his future wife (Elizabeth Berridge) around a party while making obscene remarks. Furious that this clownish boy can produce such beautiful music, Salieri determines to keep Mozart's talent from lasting recognition and sets himself on a course for Mozart's destruction that leads to his own as well. Mozart continues to mount beautiful, moving operas (incredibly staged in the film), but becomes obsessed with writing a Requiem as his friends, family, health, and resources waste away, Salieri's manipulating presence always there. It is hard to imagine anyone--whether they are knowledgeable about classical music or not--who would not be held captive by this superb feast for the eyes and ears, a film whose excellence can be felt in every detail.