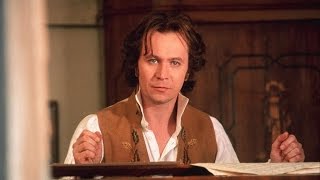 A lush, epic staging of the life and loves of Ludwig Van Beethoven, this film examines the tempestuous composer through one man's search for Beethoven's supposed "Immortal Beloved." The sequence involving the first public performance of the Ninth Symphony is particularly stirring.

Shortly after Ludwig van Beethoven's death, a mysterious letter signed by the musical genius appears: "What longings with tears for you...my life...my everything...farewell then...Go on loving me, ever yours, ever mine, forever, L.." These mysterious words prove the existence of one true love for Beethoven in the midst of numerous affairs -- and never a marriage -- with countesses. However, throughout history, Beethoven's "Immortal Beloved" remains unknown until now, where with enough evidence, Beethoven's "longing" is revealed, disclaiming all previous theories and biographies about one of the greatest composers who ever lived.