...all it takes is a little confidence.

305K ratings
Currently Out of Stock: We'll get more as soon as possible
Notify Me When Available
Add to Wishlist
Format:  DVD
item number:  FVGQ
Different formats available:
The Sting (Blu-ray) for $18.20
Also released as:
Sting for $16.40
91% recommend us! 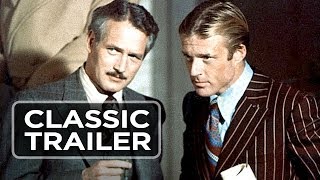 Hoping that box-office lighting might strike twice, George Roy Hill again joined forces with Paul Newman and Robert Redford, who star as con men Henry Gondorff and Johnny Hooker in THE STING. In the Chicago of the 1930s, Johnny's partner, Luther (Robert Earl Jones), is fatally wounded by a victim of one of their scams who turns out to be powerful syndicate boss Doyle Lonnegan (Robert Shaw). Eager for revenge, Johnny takes a tip from his dying partner and seeks out mutual friend Gondorff, a consummate master of the long con. Gondorff rouses himself from his alcoholic inertia and agrees to help Johnny take down the despicable Lonnegan, conscripting an army of grifters ready to avenge their friend's death. The labyrinthine plot, which is stuffed with false leads, red herrings, and a double-cross-a-minute, involves a fake bookie joint, a very persistent FBI agent, a bunch of corrupt cops, and one shifty dame. An extremely entertaining film, the Oscar-winning film transcends the genre through the superb acting of the three leads, the keen attention to the re-creation of period detail, and a fiendishly intricate script that cons audiences completely. The wonderful score, which became immensely popular, featured Marvin Hamlisch's orchestral transcriptions of Scott Joplin's piano rags; the film led to a revival of interest in the composer. The film is one of the most entertaining films of the 1970s and lives up to its hype on repeat viewings.

This lighthearted caper tells the story of two con men who attempt to swindle a powerful racketeer in 1930s Chicago. Johnny Hooker is a young confidence man whose mentor is murdered when they run afoul of syndicate head Doyle Lonnegan. Seeking revenge as well as a career boost, Hooker joins forces with old pro Henry Gondorff. Together the two scam artists cook up a complicated gambling sting that could net them the big score they are looking for.

The Bridge on the River Kwai
$13.10 Super Savings
Add to Cart