Before He Created the Magic. He Lived Every Bit of It. 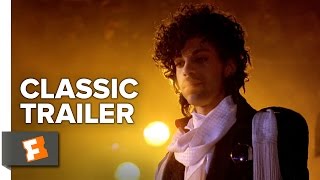 Take a richly-human story of survival and triumph, a new soundtrack by the hottest bands around and the startling presence and musicality of rock superstar Prince - the man who lived the music - and you've got what may be in Rolling Stone's words "the smartest, most spiritually ambitious rock-'n'-roll movie ever made."

A brilliant, talented young musician struggles for success even as a rival musician threatens to supplant him, both professionally and romantically. "Purple Rain" features Prince, in his own inimitable style, performing many of his latest hits, including "Purple Rain," "When Doves Cry," and "Let's Go Crazy." Academy Awards: Best Original Song Score.

Music star Prince stars as "The Kid" in this semi-autobiographical film, which follows the escapades of a tortured young musician trying to survive in a dysfunctional environment. He finds solace in the affections of a lovely young singer, but his first love is making his funky, unique brand of music, which he performs at an ultra-hip Minneapolis nightclub. The Kid must also contend with Morris, his nemesis both in music and romance
The popular soundtrack of this highly successful film contains many of Prince's most popular tunes, such as "Let's Go Crazy", "When Doves Cry", and the title song.