A marathon collection of Christmas shorts from the Baby Boomer era -- Some unbelievably creative, some unintentionally hilarious, and some downright disturbing! 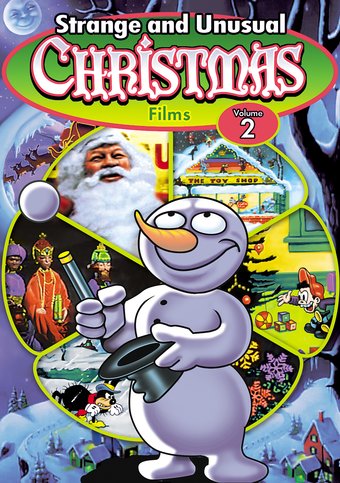 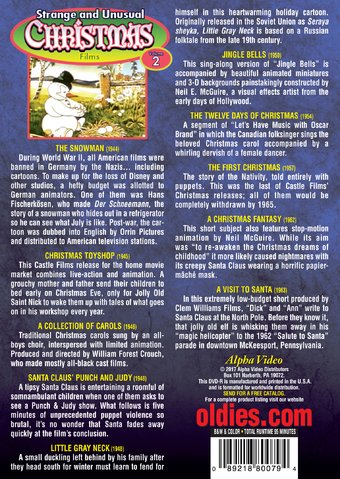 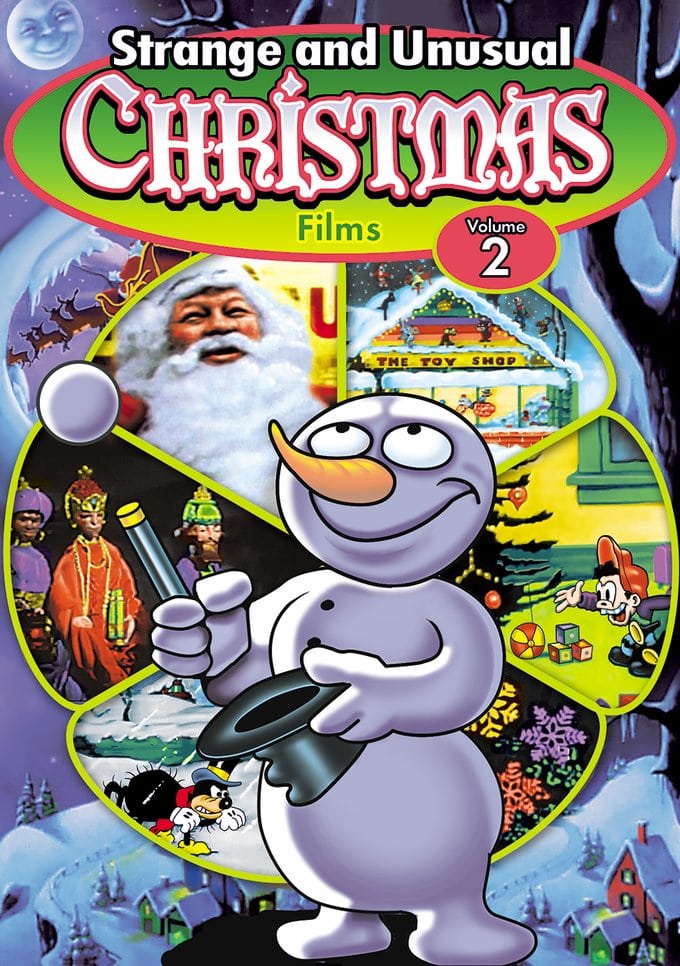 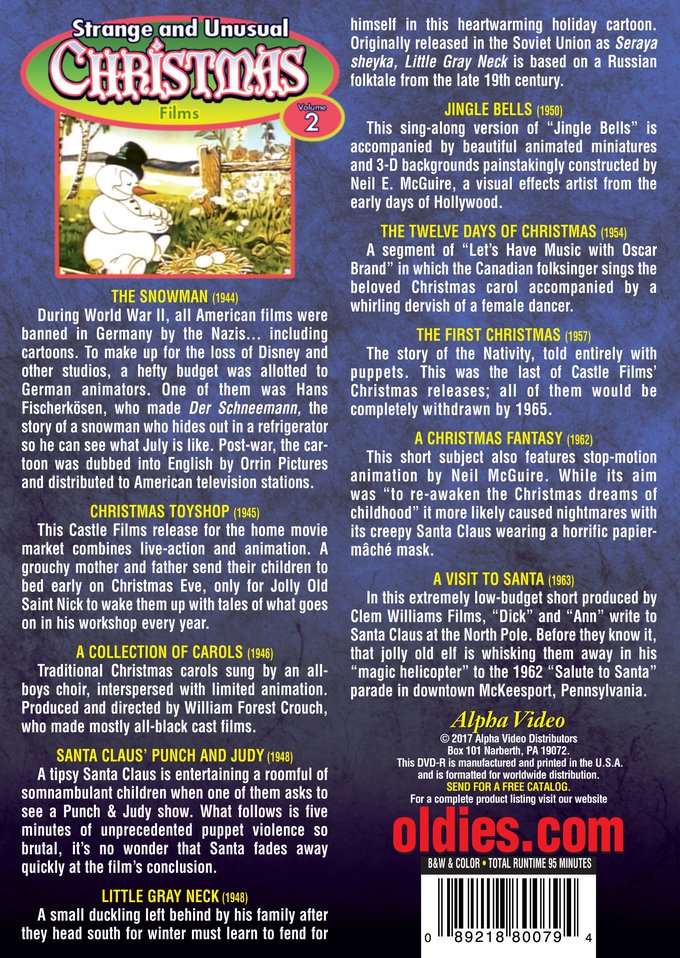 THE SNOWMAN (1944): During World War II, all American films were banned in Germany by the Nazi government...including cartoons. To make up for the loss of Disney and other studios, a hefty budget was allotted to German animators. One of them was Hans Fischerkösen, who made Der Schneemann (The Snowman), the story of a snowman who hides out in a refrigerator so he can see what July is like. Post-war, the cartoon was dubbed into English by Orrin Pictures (of Far Rockaway, Queens) who distributed it to American television stations. Usually shown after holiday parades on Thanksgiving, The Snowman's morbid ending of its protagonist melting away into nothingness traumatized generations of children.

CHRISTMAS TOYSHOP (1945): This Castle Films release for the home movie market combines live-action and animation. A grouchy mother and father send their children to bed early on Christmas Eve, only for Jolly Old Saint Nick to wake them up with tales of what goes on in his workshop every year (via a repurposed 1930s cartoon.)

A COLLECTION OF CAROLS (1946): Traditional Christmas carols are sung by an all-boys choir (but bizarrely dubbed by a men's choir), interspersed with limited animation. Produced and directed by William Forest Crouch, who made mostly all-black cast films (like 1947's Reet, Petite and Gone with Louis Jordan.)

SANTA CLAUS' PUNCH AND JUDY (1948): A tipsy Santa Claus is entertaining a roomful of somnambulant children when one of them asks to see a Punch & Judy show. What follows is five minutes of unprecedented puppet violence so brutal, it's no wonder that Santa fades away quickly at the film's conclusion. Punch & Judy and Christmas proved to be an unpopular mix, so Castle Films replaced this short in their catalog with Howdy Doody's Christmas in 1951.

LITTLE GRAY NECK (1948): A small duckling left behind by his family after they head south for winter must learn to fend for himself in this heartwarming holiday cartoon. Originally released in the Soviet Union as Seraya sheyka, Little Gray Neck is based on a Russian folktale from the late 19th century.

JINGLE BELLS (1950): This sing-along version of "Jingle Bells", sung by the ADA Crusaders Quartet, is accompanied by beautiful animated miniatures and 3-D backgrounds painstakingly constructed by Neil E. McGuire, who had provided artwork and visual effects for intertitles during the silent era. You can see his work in films like Passion (1920) and Black Oxen (1923).

THE TWELVE DAYS OF CHRISTMAS (1954): A segment of "Let's Have Music with Oscar Brand" in which the Canadian folksinger sings the beloved Christmas carol accompanied by a whirling dervish of a female dancer.

THE FIRST CHRISTMAS (1957) : The story of the Nativity, told entirely with puppets. This was the last of Castle Films' Christmas releases; all of them would be completely withdrawn by 1965.

A CHRISTMAS FANTASY (1962): This short subject (which probably dates back further than its documented release date of 1962) also features stop-motion animation by Neil McGuire. While its aim was "to re-awaken the Christmas dreams of childhood" it more likely caused nightmares with its creepy Santa Claus wearing a horrific papier-mâché mask. Cinematographer Leo Caloia was a camera club enthusiast who later claimed to have "discovered" Marilyn Monroe (he took a few photos of the-then Norma Jean Baker in a swimsuit.)

A VISIT TO SANTA (1963): In this extremely low-budget short produced by Clem Williams Films, "Dick" and "Ann" write to Santa Claus at the North Pole (which looks suspiciously like a prefab Lustron house.) Before they know it, that jolly old elf is whisking them away in his "magic helicopter" to the 1962 "Salute to Santa" parade in downtown McKeesport, Pennsylvania. Santa also gives them a tour of the Olympia Shopping Center, but not without reminding them "that the entire Christmas celebration is to commemorate the birth of Jesus Christ, hundreds of years ago."

Animation | Campy | Holiday | Christmas
This product is made-on-demand by the manufacturer using DVD-R recordable media. Almost all DVD players can play DVD-Rs (except for some older models made before 2000) - please consult your owner's manual for formats compatible with your player. These DVD-Rs may not play on all computers or DVD player/recorders. To address this, the manufacturer recommends viewing this product on a DVD player that does not have recording capability.