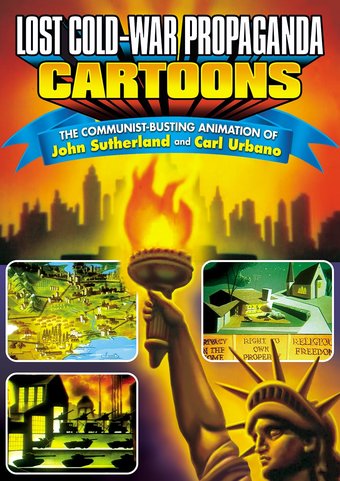 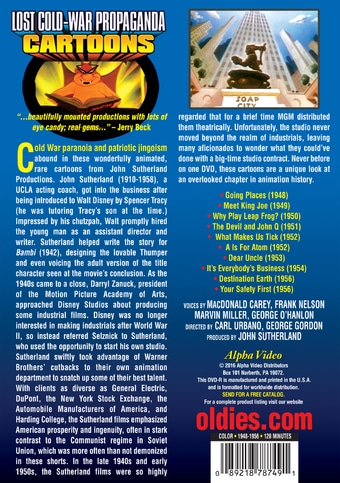 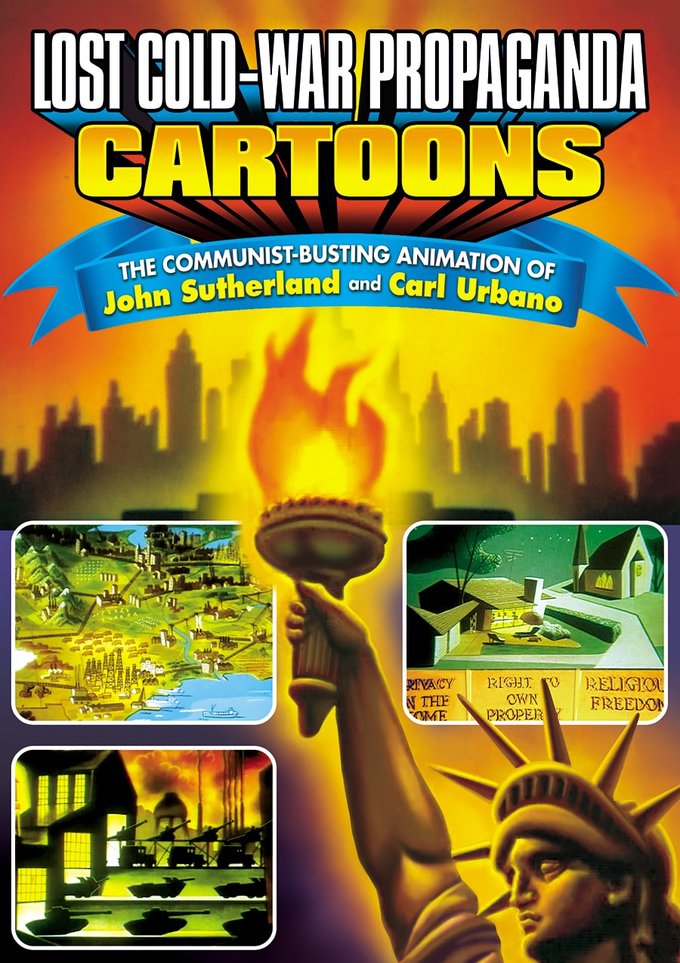 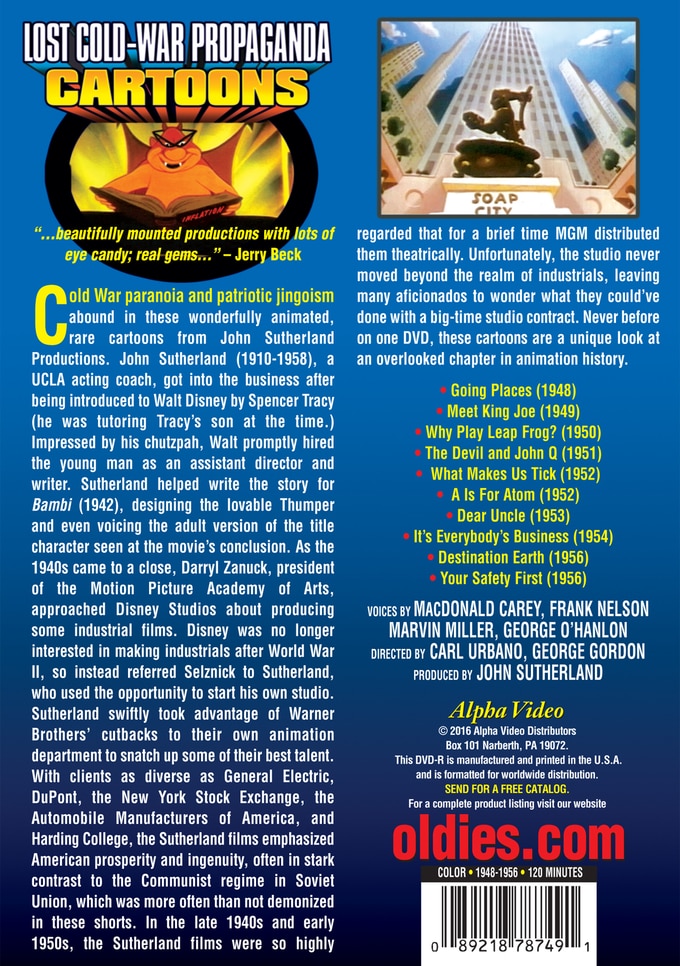 "...beautifully mounted productions with lots of eye candy; real gems..."-- Jerry Beck. Cold War paranoia and patriotic jingoism abound in these wonderfully animated, rare cartoons from John Sutherland Productions. John Sutherland (1910-1958), a UCLA acting coach, got into the business after being introduced to Walt Disney by Spencer Tracy (he was tutoring Tracy's son at the time.) Impressed by his chutzpah, Walt promptly hired the young man as an assistant director and writer. Sutherland helped write the story for Bambi (1942), designing the lovable Thumper and even voicing the adult version of the title character seen at the movie's conclusion. As the 1940s came to a close, Darryl Zanuck, president of the Motion Picture Academy of Arts, approached Disney Studios about producing some industrial films. Disney was no longer interested in making industrials after World War II, so instead referred Selznick to Sutherland, who used the opportunity to start his own studio. Sutherland swiftly took advantage of Warner Brothers' cutbacks to their own animation department to snatch up some of their best talent. This included much of Chuck Jones's unit (Maurice Noble, Abe Levitow) as well as the young Bill Melendez (later to go on to fame as producer of the Peanuts television specials and the voice of Snoopy) and Carl Urbano (remembered for such Hanna-Barbera Saturday Morning fare as Challenge of the Superfriends and The Smurfs.) With clients as diverse as General Electric, DuPont, the New York Stock Exchange, the Automobile Manufacturers of America, and Harding College, the Sutherland films emphasized American prosperity and ingenuity, often in stark contrast to the Communist regime in Soviet Union, which was more often than not demonized in these shorts. Many of them were written by Bill Scott, soon to be co-producer with Jay Ward of The Rocky and Bullwinkle Show as well as the voice of Bullwinkle himself. Music is provided by cocktail lounge maestro Les Baxter and Eugene Poddany, later to score Chuck Jones's Dr. Seuss adaptations How the Grinch Stole Christmas! (1966) and Horton Hears a Who (1970). Voices include Macdonald Carey (Days of Our Lives ), Frank Nelson (The Jack Benny Show), Marvin Miller (The Millionaire) and George O'Hanlon (playing a character in the futuristic short Your Safety First similar to the one he would years later on The Jetsons.) In the late 1940s and early 1950s, the Sutherland films were so highly regarded that for a brief time MGM distributed them theatrically. Unfortunately, the studio never moved beyond the realm of industrials, leaving many aficionados to wonder what they could've done with a big-time studio contract. Never before on one DVD, these cartoons are a unique look at an overlooked chapter in animation history.

War | Television / TV Series
This product is made-on-demand by the manufacturer using DVD-R recordable media. Almost all DVD players can play DVD-Rs (except for some older models made before 2000) - please consult your owner's manual for formats compatible with your player. These DVD-Rs may not play on all computers or DVD player/recorders. To address this, the manufacturer recommends viewing this product on a DVD player that does not have recording capability.