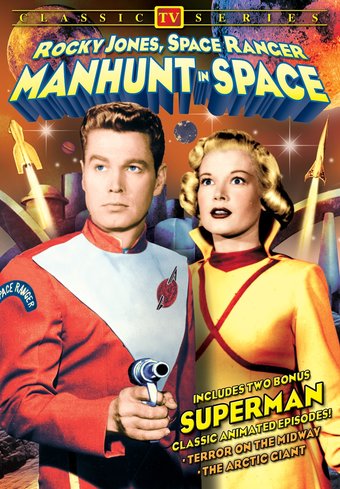 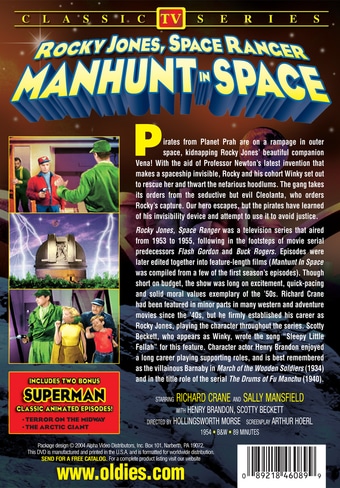 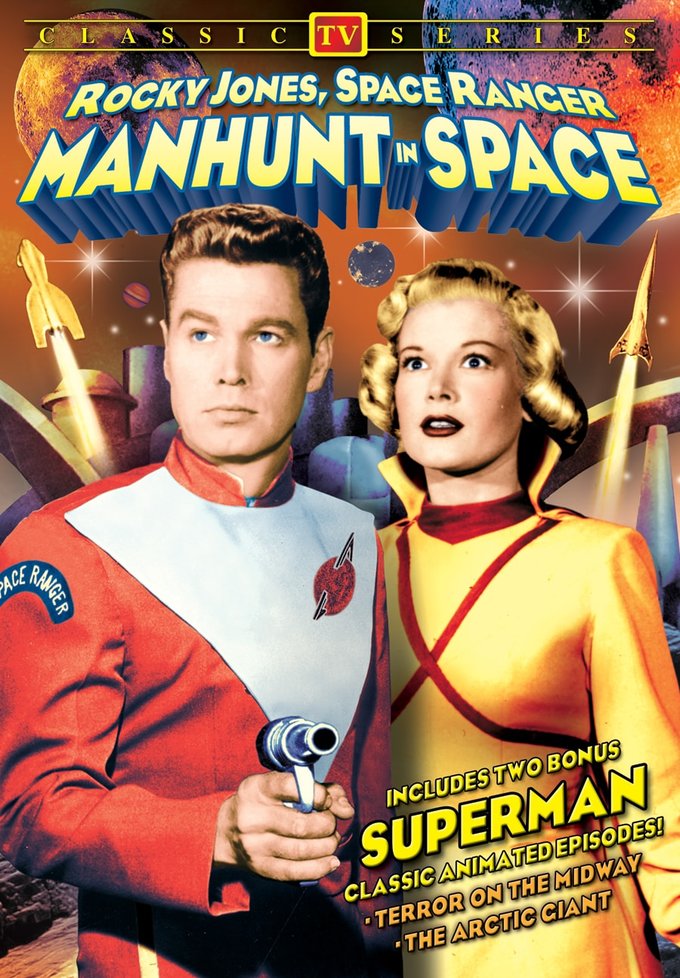 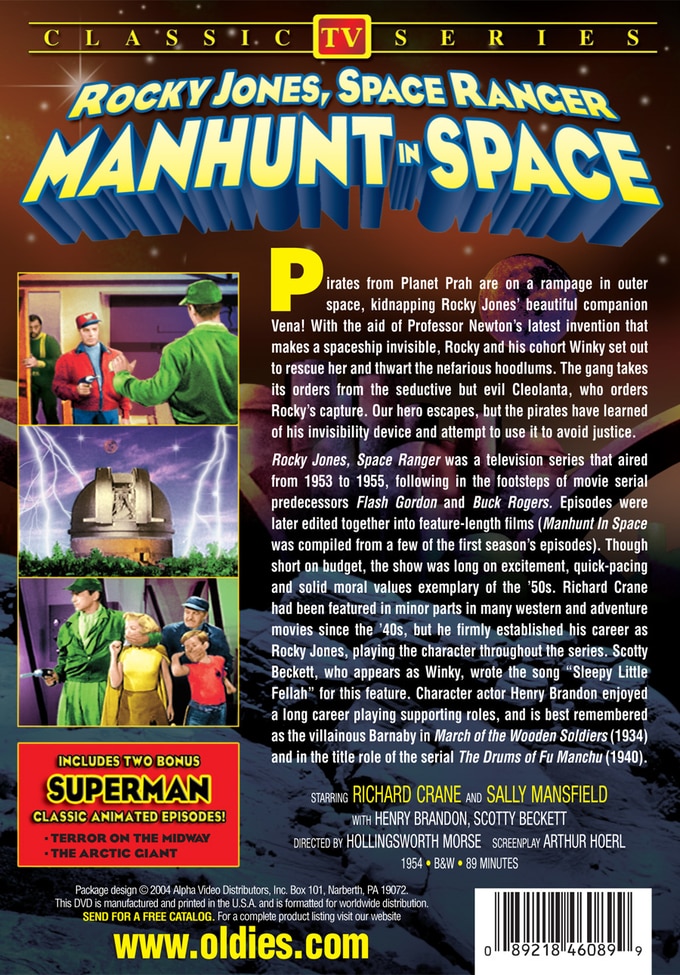 Pirates from Planet Prah are on a rampage in outer space, kidnapping Rocky Jones' beautiful companion Vena! With the aid of Professor Newton's latest invention that makes a spaceship invisible, Rocky and his cohort Winky set out to rescue her and thwart the nefarious hoodlums. The gang takes its orders from the seductive but evil Cleolanta, who orders Rocky's capture. Our hero escapes, but the pirates have learned of his invisibility device and attempt to use it to avoid justice.

"Rocky Jones, Space Ranger" was a television series that aired from 1953 to 1955, following in the footsteps of movie serial predecessors Flash Gordon and Buck Rogers. Episodes were later edited together into feature-length films (Manhunt In Space was compiled from a few of the first season's episodes). Though short on budget, the show was long on excitement, quick-pacing and solid moral values exemplary of the '50s.

Richard Crane had been featured in minor parts in many western and adventure movies since the '40s, but he firmly established his career as Rocky Jones, playing the character throughout the series. Scotty Beckett, who appears as Winky, wrote the song "Sleepy Little Fellah" for this feature. Character actor Henry Brandon enjoyed a long career playing supporting roles, and is best remembered as the villainous Barnaby in March of the Wooden Soldiers (1934) and in the title role of the serial The Drums of Fu Manchu (1940).

Television viewers in the early 1950s were delighted to find this fun slice of science-fiction emerge from their television sets. ROCKY JONES, SPACE RANGER (played by Richard Crane) was the muscular, enigmatic hero who frequently saved the future citizens of the universe with his daring escapades. Here, some evil space pirates threaten to unbalance Rocky's harmonious world, so he uses some special powers of invisibility to thwart them.

Action | Series | Heroes | Pirates | Space | Outer Space | Spaceships
This product is made-on-demand by the manufacturer using DVD-R recordable media. Almost all DVD players can play DVD-Rs (except for some older models made before 2000) - please consult your owner's manual for formats compatible with your player. These DVD-Rs may not play on all computers or DVD player/recorders. To address this, the manufacturer recommends viewing this product on a DVD player that does not have recording capability.

ROCKY JONES IS THE MAN & CLEOLANTRA IS HOT IN ANY ERA! Movie Lover: Joseph Wehberg from Baltimore, MD US -- February, 12, 2005


Manhunt In Space was originally titled Pirates of Prah and released on May 8th 1954 as a 3 part TV serial. I can't help it, I love this stuff. Rocky (Richard Crane) is just the coolest. He is never wrong and always wins. Virtuous is the guys middle name. He doesn't even look twice at the very attractive and mini skirt clad Vena (Sally Mansfield) the only regular female cast member. Winky (Scotty Beckett) is Rocky's co-pilot on the XV2. What Winky lacks in brain and brawn he makes up for in loyalty. And of course there is the ever present Bobby (Robert Lyden) [who does Bobby belong too?]

Vena is stranded in space by wicked pirates! Rocky makes the Orbit Jet invisible with Professor Newton's latest invention Cold Light. Rocky and Winky must save Vena and track the pirates to their secret base -- It is no surprise that the pirates are employed by the naughty and sexy Cleolanta, who's still so hot for Rocky that you can almost see her thighs quiver whenever his name is mentioned. In the end Rocky as always prevails.

I watched this series on local Baltimore TV station in the mid-sixties and never missed a single episode! I liked it then and I still like it now! Great copy! Thanks, Alpha