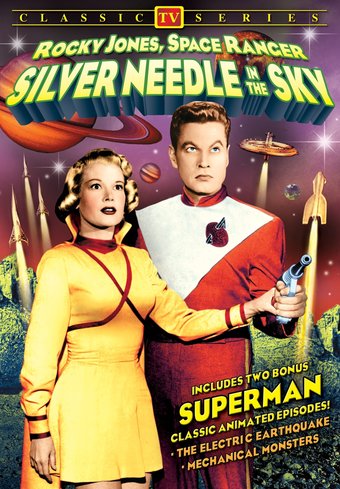 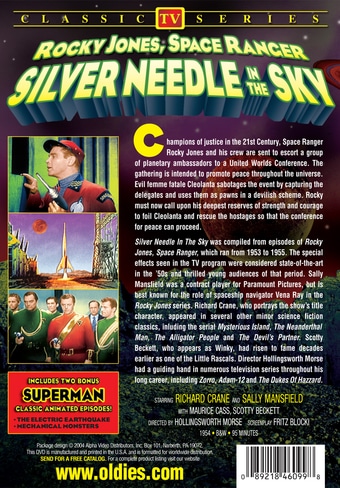 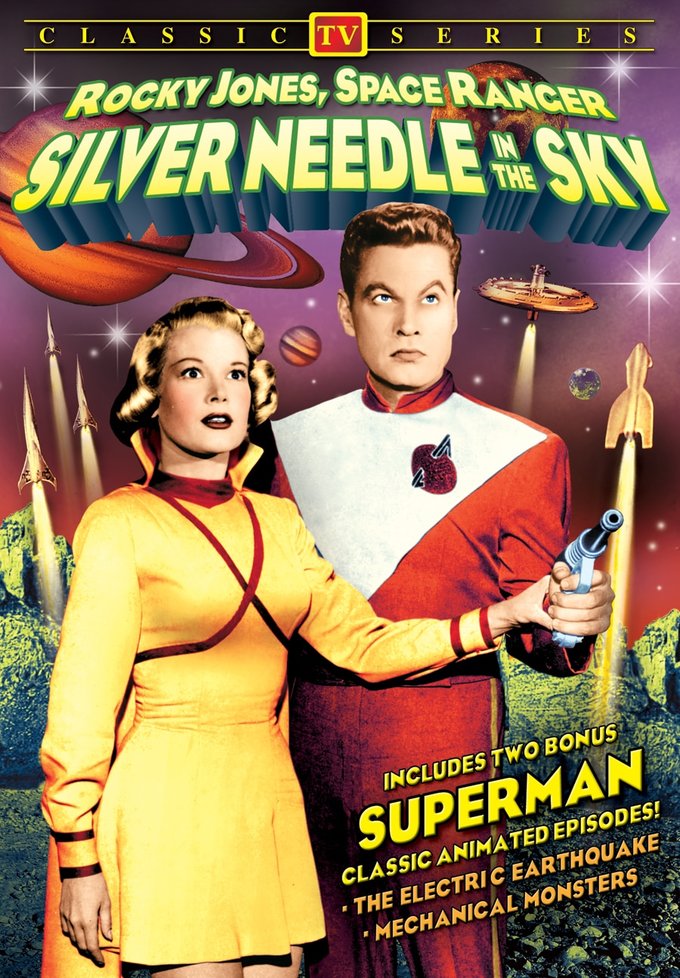 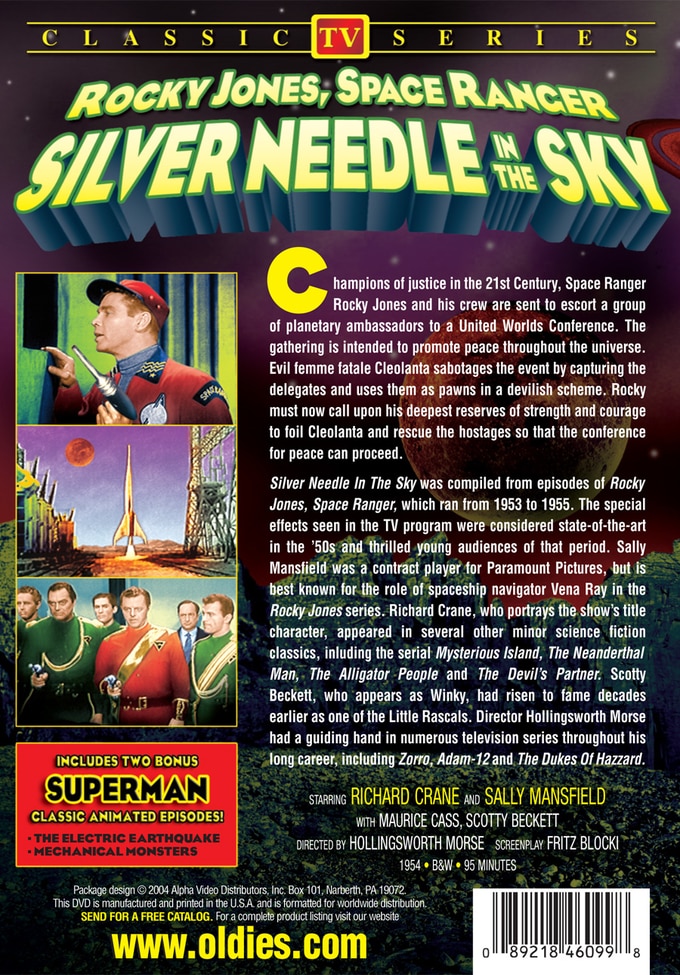 Champions of justice in the 21st Century, Space Ranger Rocky Jones and his crew are sent to escort a group of planetary ambassadors to a United Worlds Conference. The gathering is intended to promote peace throughout the universe. Evil femme fatale Cleolanta sabotages the event by capturing the delegates and uses them as pawns in a devilish scheme. Rocky must now call upon his deepest reserves of strength and courage to foil Cleolanta and rescue the hostages so that the conference for peace can proceed.

Silver Needle In The Sky was compiled from episodes of "Rocky Jones, Space Ranger," which ran from 1953 to 1955. The special effects seen in the TV program were considered state-of-the-art in the '50s and thrilled young audiences of that period. Sally Mansfield was a contract player for Paramount Pictures, but is best known for the role of spaceship navigator Vena Ray in the Rocky Jones series. Richard Crane, who portrays the show's title character, appeared in several other minor science fiction classics, including the serial Mysterious Island, The Neanderthal Man, The Alligator People and The Devil's Partner. Scotty Beckett, who appears as Winky, had risen to fame decades earlier as one of the Little Rascals. Director Hollingsworth Morse had a guiding hand in numerous television series throughout his long career, including "Zorro," "Adam-12" and "The Dukes Of Hazzard."

Another Rocky Jones exploit in which a political firestorm erupts aboard a spaceship carrying interplanetary diplomats to an important conference.

Action | Adventure | Series | Science-Fiction | Space Exploration | Vintage TV | Spaceships
This product is made-on-demand by the manufacturer using DVD-R recordable media. Almost all DVD players can play DVD-Rs (except for some older models made before 2000) - please consult your owner's manual for formats compatible with your player. These DVD-Rs may not play on all computers or DVD player/recorders. To address this, the manufacturer recommends viewing this product on a DVD player that does not have recording capability.


Rocky Jones was one of my favorite TV shows. It's a lot of fun to watch it 40+ years later and think how they thought the future would be. Not much imagination for high tech. I thoroughly enjoyed it. The two Superman cartoons are classics. Max Fleischer animation was ahead of his time.


One of several features made from strung-together episodes of the early sci-fi TV show, Rocky Jones, Space Ranger. Rocky and his sidekick Winky (if he looks kinda familiar it's because he was Spanky's pal Scotty in the Little Rascals - he even still wears his cap at a slight angle) are assigned the mission of taking some ambassadors to a United Worlds conference... but an evil female alien named Cleolanta tries to sabotage the mission and abduct the delegates. The fate of Earth's standing in the universe is in the hands of Rocky, Winky (ya gotta wonder if it's short for "Bullwinkle"), a little kid, and a chick in an outer-space-type miniskirt, all wandering around sparse, minimalist sets in cheap costumes. Cleolanta wants to swap the delegates for some of her people who are in prison, but she pulls a double-cross. Rocky and company may have a fight on their hands, and so do some of Cleolanta's henchmen as they vy for power. It's all pretty quaint and silly now... and it probably was back then, too, unless you were 12, in which case it was probably cool as heck. It's a little slow and the action's pretty mundane, but if you watch stuff like this in the first place, you'll probably be forgiving of that.