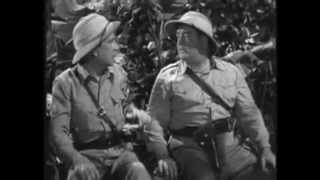 This is one of Abbott & Costello's funniest films. The bumbling duo are hired as guides by gangsters in search of a secret treasure. They embark on a journey that leads them on a wild safari of outlandish fun. Bud & Lou keep you laughing as they encounter growling lions, Kong-sized apes and hungry cannibals.

Buzz Johnson (Bud Abbott) and Stanley Livingston (Lou Costello) go on an African safari in search of treasure. Buzz is a bookseller who tricks Diana Emerson (Hillary Brooke) into believing that his fellow bookseller Stanley is an expert on Africa. They are thereby abducted by Diana's henchmen who expect the two self proclaimed hunters to lead her to an African tribe. On the way there they run up against giant apes, lion tamers, and a wild river. Eventually Buzz makes his way back to the States and Stanley lucks into some diamonds and purchases the store where they both used to work. By the end, Stanley hires Buzz to operate the elevator. Charles Barton directs some great gags and funny comedy routines in this lively film. This story contains the much-loved theme of Lou being terrorized by an evil pushy woman who eventually gets so fed up with his ineptitude that she wants him dead. Look for great comic turns by Martin Wilkins as the dreaded Cannibal Chief and Shemp Howard as Gunner.

23%off
Abbott & Costello
Jack and the Beanstalk
$6.90 Super Savings
Add to Cart

Abbott & Costello
Jack and the Beanstalk
$10.90
Add to Cart