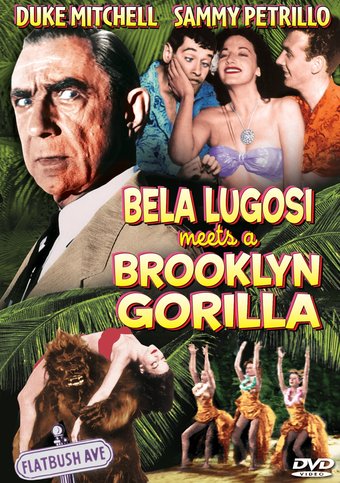 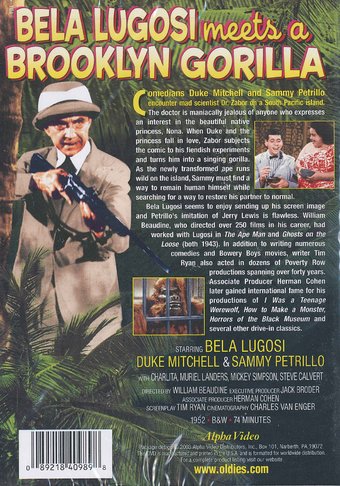 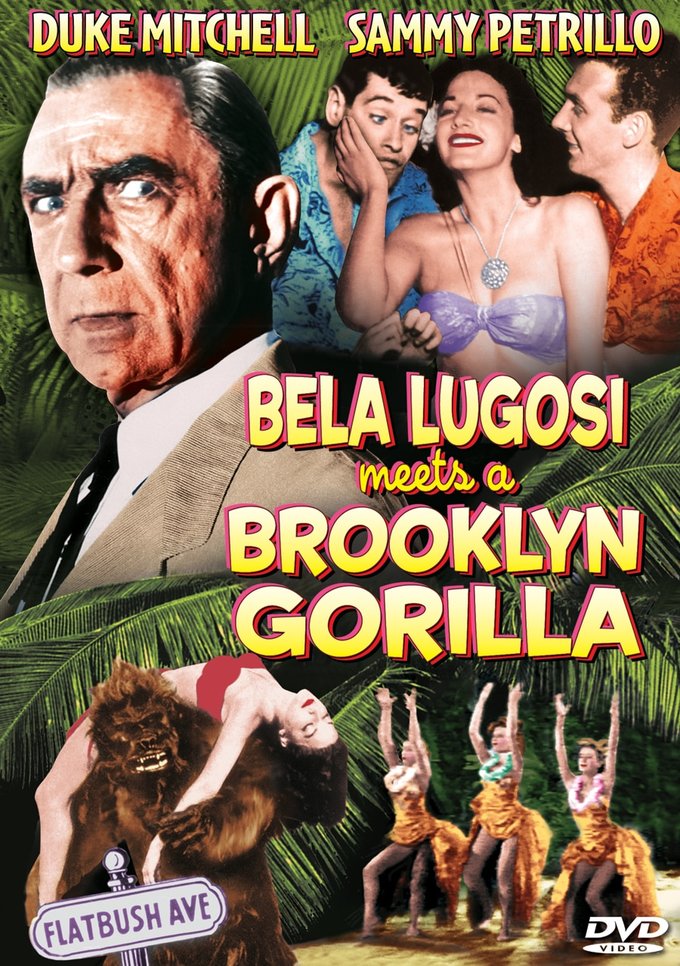 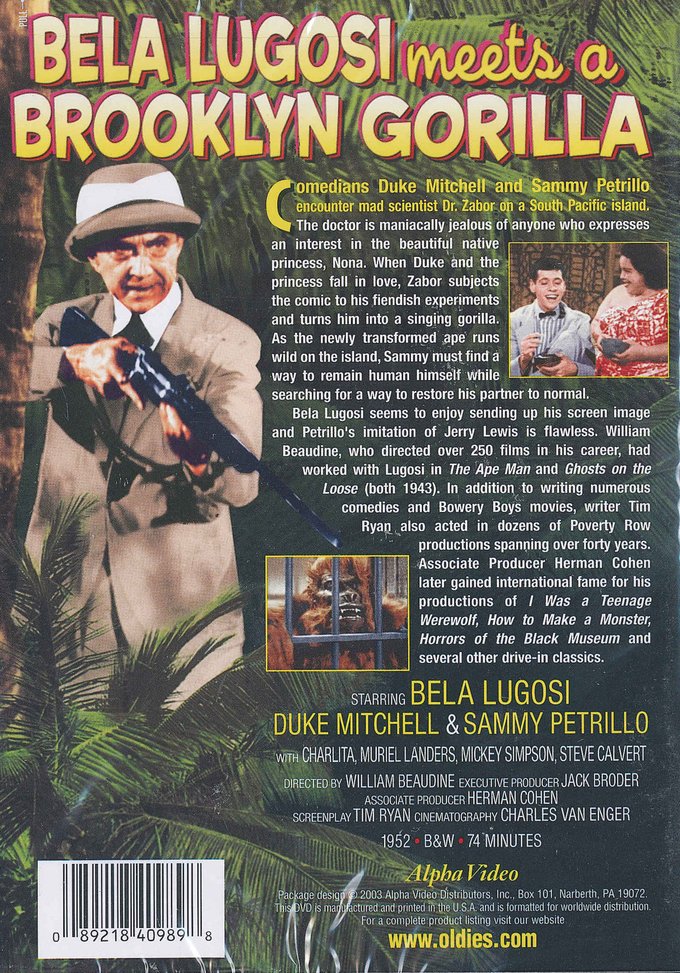 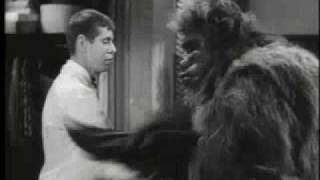 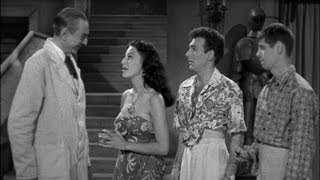 Comedians Duke Mitchell and Sammy Petrillo encounter mad scientist Dr. Zabor on a South Pacific island. The doctor is maniacally jealous of anyone who expresses an interest in the beautiful native princess, Nona. When Duke and the princess fall in love, Zabor subjects the comic to his fiendish experiments and turns him into a singing gorilla. As the newly transformed ape runs wild on the island, Sammy must find a way to remain human himself while searching for a way to restore his partner to normal. Bela Lugosi seems to enjoy sending up his screen image and Petrillo's imitation of Jerry Lewis is flawless. William Beaudine, who directed over 250 films in his career, had worked with Lugosi in The Ape Man and Ghosts on the Loose (both 1943). In addition to writing numerous comedies and Bowery Boys movies, writer Tim Ryan also acted in dozens of Poverty Row productions spanning over forty years. Associate Producer Herman Cohen later gained international fame for his productions of I Was a Teenage Werewolf, How to Make a Monster, Horrors of the Black Museum and several other drive-in classics.

The not-very-famous comedy team Mitchell and Petrillo doing their shameless Dean/Lewis impersonation meet Lugosi who promptly injects Mitchell with a serum that turns him into a gorilla. A.K.A. "The Boys From Brooklyn."

Customer Rating:
Based on 2729 ratings.


Sammy Petrillo bore a strong resemblance to Jerry Lewis and made a career out of impersonating him. Petrillo teamed with crooner Duke Mitchell (a Dean Martin substitute) to form a nightclub act.
In the movie, the boys arrive on a tropical island where they discover a primitive tribe and its beautiful college-educated princess. Mitchell and the princess hit it off, evoking the jealousy of a scientist (Lugosi) who lives on the island. The scientist decides to culminate his experimentation and get rid of the competition by turning Mitchell into a gorilla.
Martin and Lewis contemplated a lawsuit over this movie, although it also reminds me of a Road movie. Perhaps Crosby and Hope should also have thought about suing too.
Leonard Maltin’s Movie Guide calls Bela Lugosi Meets a Brooklyn Gorilla one of the all-time-great bombs and warns, “Proceed at your own risk.” I think is a fun but low-budget movie


You can find this one in the dollar bins. It's definitely worth that much. The production values are very good and Bela is excellent. The film is of historical value (Quick! Call the Smithsonian!)because of the extremely blatent copying of Dean Martin and Jerry Lewis's radio / stage / screen personae. Jerry sued them and won (obviously). The movie was taken out of distribution. We are the lucky ones to see this aping: to hammer the point home, Duke even turns into one in the movie! If you've never seen Martin and Lewis, time to get their 'Colgate Comedy Hour' DVDs or 'At War With the Army' (also in the dollar bin!). It's all great trash!


I had searched for this film for a decade after reading a review of it in Michael Sauter's must-read guide to bad movies, "The Worst Movies of All Time." Along with Ted V. Mikels's "Astro Zombies" and the "Santo" films, the book's description of "Brooklyn Gorilla" made it seem priceless, something I needed to see before I died--and now that it is finally available on DVD, I realize that my search was not in vain. Although described as cheap-looking, the production values here are on par with many films of the era, and feature good-natured and enjoyable performances from Duke Mitchell and Sammy Petrillo, a real-life vaudeville act known for doing many impressions, not just Martin & Lewis (others included Johnny Ray). The real Jerry was apparently VERY freaked out by how closely Petrillo could mimic him. I wonder, watching this and other Lugosi films made at this time, how Lugosi's son can continually demonize Ed Wood as an opportunist and a user who tricked his father into doing awful films. Does he consider films like this to be superior to "Glen or Glenda"?


What makes this movie great is that it so unashamedly a rip-off of Martin and Lewis. Duke kind of looks like Dino, but sings even worse (if that's possible) and Sammy's antics make Lewis' wackiest characters look like Sir Laurence Olivier. Thankfully for Bela, Ed Wood was looming in the distance......


Strange movie that grows on you over time. Interesting to watch the blatant rip-off of Dean and Lewis by Duke Mitchell and Sammy Petrillo. Plot is weak and ending is weaker, but over-all the movie is very entertaining. Enjoy this campy movie!

Hey, the movie is impossibly cheap, and the comedy team of Mitchell and Petrillo is a SHAMELESS Martin and Lewis rip-off. But for a short evening of mindless fun, you can't go wrong with this movie.

In addition, the DVD quality is quite good.

In my opinion, this was money well spent!