Abbott. Costello. Laughton. Three stars boasting one Oscar between them deliver the yo-ho-ho-ho-ing of this merry musical-comedy tale of pirates and buried treasure. 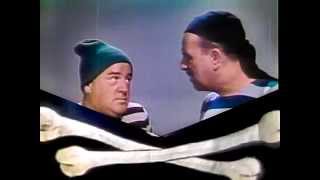 Abbott. Costello. Laughton. Three stars boasting one Oscar between them deliver the yo-ho-ho-ho-ing of this merry musical-comedy tale of pirates and buried treasure. Casting an acclaimed actor renowned for gravitas in a knockabout romp may seem unusual. Yet Academy Award-winner Charles Laughton, who portrayed menacing Captain Bligh in Mutiny on the Bounty and the title role in the swashbuckling adventure Captain Kidd, sails into this sea of silliness with great glee. Instigators of most of that silliness are, of course, the legendary Bud and Lou, turning the voyage under the Jolly Roger into a jollier one with their comic timing, verbal jousts and madcap mayhem. Arrrrrr you ready?

Abbott and Costello tangle with the infamous pirate over a treasure map that they received in error.

Adventure | Buddies | Theatrical Release
This product is made-on-demand by the manufacturer using DVD-R recordable media. Almost all DVD players can play DVD-Rs (except for some older models made before 2000) - please consult your owner's manual for formats compatible with your player. These DVD-Rs may not play on all computers or DVD player/recorders. To address this, the manufacturer recommends viewing this product on a DVD player that does not have recording capability.