A police detective falls in love with a murder suspect in this rare film noir. 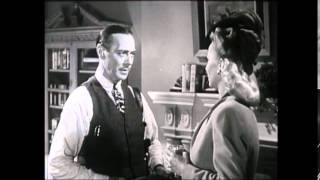 The bullet-ridden body of a private eye is found dumped on the steps of police headquarters. All evidence points to Janet Bradley, the beautiful daughter of a mayoral candidate. Lieutenant Sam Carson believes that she is the unsuspecting victim of a conspiracy to discredit her father. Carson will have to untangle a mass of red tape to find the real killer. His growing attraction to Janet certainly doesn't make solving the case any easier.

This 20th Century Fox film noir features two actors whose voices will be familiar to fans of the Golden Age of Radio. William Gargan played Martin Kane, Private Eye on the Mutual Broadcasting System from 1949 to 1951 (he simultaneously starred in a television version on NBC), while Charles Russell was the first actor to star as Yours Truly, Johnny Dollar on CBS from 1949-1950. Lovely Carole Landis rocketed to stardom after Hal Roach cast her in One Million B.C. (1940). She had previously appeared with Gargan in I Wake Up Screaming (1941). Sadly, Landis would commit suicide a short two years after Behind Green Lights' release at the age of 29. Young Richard Crane would become the star of the science fiction television series Rocky Jones, Space Ranger (1954). African-American comedian Fred "Snowflake" Toones appears briefly in the opening police station sequence.

Mystery | Romance | Murder | Police | Detective | Murder Investigations | Love | Cars / Automobiles
This product is made-on-demand by the manufacturer using DVD-R recordable media. Almost all DVD players can play DVD-Rs (except for some older models made before 2000) - please consult your owner's manual for formats compatible with your player. These DVD-Rs may not play on all computers or DVD player/recorders. To address this, the manufacturer recommends viewing this product on a DVD player that does not have recording capability.