Call girl Gilda Karlson is wanted for the murder of the man that led her into prostitution. Fleeing the authorities, she finds deadly sanctuary on an island of criminals. 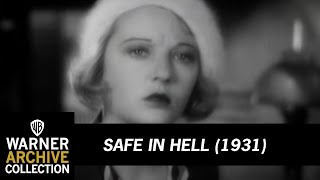 Gilda (Dorothy Mackaill) thought she had fallen as far as a woman could fall when she got a call telling her a client was requesting her "services." But when the client turns out to be the man responsible for her fall from grace, Gilda flies into a murderous rage. Taking it on the lam, Gilda finds shelter in the arms of a sailor boyfriend (Donald Cook) who smuggles her to sanctuary and safety, or so he thinks. In reality he has booked her a bridal suite in hell.

A young Barbara Stanwyck was considered for the starring role as the exiled call-girl in this extremely frank pre production-code drama directed by William A. Wellman from a play by Houston Branch). The role eventually went ot Dorothy Mackaill, an evocative British-born veteran adept at playing less than respectable women. Mackaill is Gilda Karlson, a call-girl fleeing New Orleans the supposed murder of her latest "john," Piet Van Saal (Ralf Harolde). Old boyfriend Carl Erickson (Donald Cook) arranges for safe passage to Tortuga, a Caribbean Island without extradition laws. After "marrying" the girl in the eyes of God but without the benefit of clergy, Carl leaves on his ship. Having successfully kept an international array of escaped crooks at bay, Gilda suddenly finds herself face-to-face with Van Saal, still very much alive and on Tortuga because an insurance scam went astray. The island's jealous executioner, Bruno (Morgan Wallace), hands the girl a gun "to protect herself." Van Saal attacks her, and this time Gilda manages to kill her tormentor. About to be acquitted of murder by a sympathetic jury, Gilda chooses to "confess" in order to escape a trap set by Bruno. To the strains of Pagan Moon, the wronged girl bravely faces the gallows. Forthrightly told and extremely well acted, SAFE IN HELL features two prominent African-American performers -- Nina Mae McKinney and Clarence Muse -- portraying completely un-stereotypical characters. Muse, in fact, persuaded director Wellman to drop the screenplay's standard "black" lines in favor of straight dialogue. McKinney, famous for playing the vamp in King Vidor's all-black HALLELUJAH! (1929), performs When It's Sleepy Time Down South by Clarence Muse.

Murder | Crime | Revenge
This product is made-on-demand by the manufacturer using DVD-R recordable media. Almost all DVD players can play DVD-Rs (except for some older models made before 2000) - please consult your owner's manual for formats compatible with your player. These DVD-Rs may not play on all computers or DVD player/recorders. To address this, the manufacturer recommends viewing this product on a DVD player that does not have recording capability.

Customer Rating:
Based on 1235 ratings.


William A. Wellman is one of Hollywood's greatest directors! His classics include " Wings" (1927) "The Public Enemy" (1931) "A Star Is Born(1937) and so many countless others! However, " Safe In Hell" always get overlooked! Folks, this film is one of the best pre code films ever made! Dorothy Mackaill gives a performance for the ages as a call girl fleeing the authorities to venture on a deserted island filled with undesirables! Unfortunately, Ms. Mackaill's career took a backward turn after this film yet "Safe In Hell" is an all time classic! If you are into pre code movies like myself, this film belongs in your collection!