Jack Connell survives overwhelming battle action on Guadalcanal. Yet his toughest test lies ahead. After a stateside hitch where he receives the Congressional Medal of Honor and marries, he's no longer a gung-ho devil dog when back in combat. 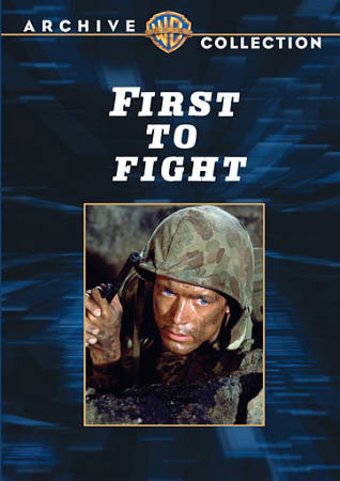 U.S. Marines are dug in and ready in First to Fight, a World War II saga that takes its title from the Marine Hymn, its battle savvy from the technical guidance of a Marine veteran of Saipan and Iwo Jima - and its power from a script by "Star Trek" veteran Gene L. Coon, himself a Marine sergeant during World War II and the Korean War.

Jack Connell (Chad Everett) survives overwhelming battle action on Guadalcanal. Yet his toughest test lies ahead. After a stateside hitch where he receives the Congressional Medal of Honor and marries, he's no longer a gung-ho devil dog when back in combat. Connell is frozen with fear - until an unflinching Sarge (Gene Hackman) rekindles his courage. Featured player Hackman would achieve acclaim and stardom later that year in another movie troop, playing Bonnie and Clyde's Buck Barrow.

In this WW II drama, a tough-as-steel Medal of Honor-winning Marine finds himself training recruits on a stateside base and waiting for his wife to bear their first child. Unfortunately, he feels bad about being home when so many other soldiers are dying in the Pacific Theater and so asks to be sent there. He becomes an officer and is assigned to command a regiment on the front line. Unfortunately, once there, he finds himself nearly paralyzed by fear and indecision until a much tougher sergeant reminds him what he is really made of.

War | Heroes | Marriage | Japan | Love | Battles | Couples | Training
This product is made-on-demand by the manufacturer using DVD-R recordable media. Almost all DVD players can play DVD-Rs (except for some older models made before 2000) - please consult your owner's manual for formats compatible with your player. These DVD-Rs may not play on all computers or DVD player/recorders. To address this, the manufacturer recommends viewing this product on a DVD player that does not have recording capability.