The Tanks Are Coming

Young screen talents and actual wartime footage combine in this saga of thundering tanks and determined Yanks in the World War II push across France, from a story by the master of war movie realism, Samuel Fuller. 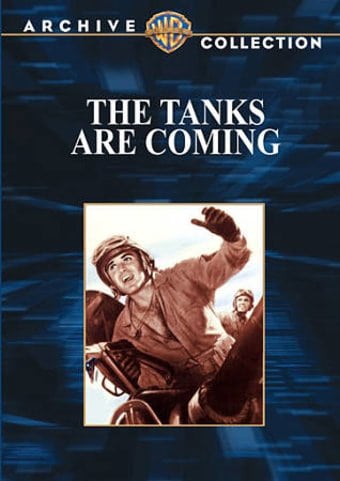 This is why they ground out as much as 90 miles a day, why they stopped only so supply lines could catch up, why they went muzzle to hellfire muzzle with the Panzer 88s. The ironbellies of the 3rd Armored Division have at last reached the enemy's homeland. They know they'll somehow cross the Dragon's Teeth of the Siegfried Line - and into a fierce tank/artillery battle.

After capturing the heroic Normandy invasion in Breakthrough, director Louis Seiler (Guadalcanal Diary) and producer Brian Foy reteamed for this fighting tale of GIs spearheading the World War II push across France. Young screen talents and actual wartime footage combine in this saga of thundering tanks and determined Yanks, from a story by the master of war movie realism, Samuel Fuller (The Big Red One).

Actual combat footage is deftly blended in with dramatized re-enactments in THE TANKS ARE COMING. Steve Cochran stars as Sergeant Sully, the hard-bitten new leader of an arrogant, fiercely independent tank platoon. Despite protests from his commanding officer and his men, Sully runs the platoon ragged, teaching them the value of humility and teamwork under fire. The sergeant's training methods pay off during the 3rd Armored Division's assault into France in the summer of 1944. Though Mari Aldon shows up briefly as a female war correspondent, TANKS ARE COMING is an essential all-male enterprise, featuring good performances by such dependable players as Philip Carey, Paul Picerni, Harry Bellaver, James Dobson and George O'Hanlon.

Big Battles | War | Heroes
This product is made-on-demand by the manufacturer using DVD-R recordable media. Almost all DVD players can play DVD-Rs (except for some older models made before 2000) - please consult your owner's manual for formats compatible with your player. These DVD-Rs may not play on all computers or DVD player/recorders. To address this, the manufacturer recommends viewing this product on a DVD player that does not have recording capability.