"Told in flashback, Task Force stars Gary Cooper in a wide-ranging performance taking him from brash young aviator to command of an aircraft carrier." 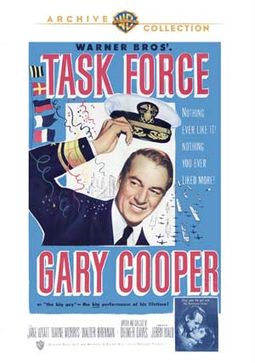 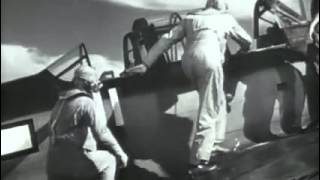 To trace the history of naval aviation and the development of the aircraft carrier, writer/director Delmer Daves expertly weaves drama with documentary. The resulting film superbly captures both the human story and the real, harrowing experience of war. Told in flashback, Task Force stars Gary Cooper in a wide-ranging performance taking him from brash young aviator to command of an aircraft carrier. Also on deck are Walter Brennan as a veteran navy sea dog and Jane Wyatt as Cooper's valiant, uncomplaining wife. The movie's other star attraction is actual World War II combat footage putting you in the middle of the chaos of a carrier deck strewn with flaming wrecks or the nail-biting tension of a ship's radar room. In all cases, the effect is gut-wrenching, the images unforgettable.

TASK FORCE far surpasses most action war films in that it focuses on the invention of the air craft carrier and its use in World War II. Gary Cooper stars as Jonathan L. Scott, the patriotic naval tactician. Having studied the science of aerial combat firsthand in World War I, Cooper devises the necessity of jumbo-sized carriers. The government deems the carriers absurd, however, until the Japanese bomb Pearl Harbor. Promoted to Admiral, Scott is given the go ahead to commandeer the U.S.S. Langley on an all scale assault of Japan. A sweeping tale of the history of Naval aviation and the development of the aircraft carrier. The film weaves the human drama of Scott's up-and-down Naval career with actual combat footage. TASK FORCE is a realistic and informative film. Director Daves gets an extra-charismatic performance from Gary Cooper. Furthermore Daves lays the sequences together with such mastery, that the seamless TASK FORCE zips by from beginning to end within the blink of an eye. Now that's how a history lesson should be.

Action | Theatrical Release
This product is made-on-demand by the manufacturer using DVD-R recordable media. Almost all DVD players can play DVD-Rs (except for some older models made before 2000) - please consult your owner's manual for formats compatible with your player. These DVD-Rs may not play on all computers or DVD player/recorders. To address this, the manufacturer recommends viewing this product on a DVD player that does not have recording capability.

The Gallant Hours
$19
Add to Cart