U.S. airman Ed Hardin pilots a damaged P-47 Thunderbolt toward a perilous but successful landing at his fighter-group base in the English countryside. The battered aircraft may never wing into the skies again but Hardin will. 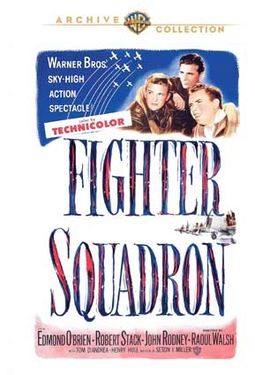 U.S. airman Ed Hardin pilots a damaged P-47 Thunderbolt toward a perilous but successful belly flop landing at his fighter-group base in the English countryside. The battered aircraft may never wing into the skies again. Hardin will. "Notify the taxpayer to get me another one," he quips.

Filmmaker Raoul Walsh (Objective, Burma!) is at the controls of this keep-'em-flying Technicolor adventure, augmenting thunderous sky battles with actual wartime footage. Edmond O'Brien portrays Hardin, who tempers his flyboy recklessness when the men of the squadron are entrusted to his leadership. And a former chauffeur for Walsh makes his uncredited screen debut. His name: Rock Hudson.

Excellent Technicolor photography, principally in the aerial scenes, is the main asset of FIGHTER SQUADRON. Set in the months just prior to D-Day, the plot zeroes in on Major Ed Hardin (Edmond O'Brien), leader of a squadron of fearless combat pilots. In keeping with the conventions of the era, the training and flying sequences are counterbalanced with comic byplay involving wheeler-dealer Sergeant Dolan (Tom D'Andrea), whose flippant attitudes towards the opposite sex are a bit hard to take today. Far more effective is the performance of 15-year-old Jack Larson, making his screen debut in the role of a rookie pilot who grows up in a hurry after scoring his first kill (Larson later gained TV immortality as Jimmy Olsen on SUPERMAN). Also making his first screen appearance, in a role so small it isn't even billed, is a former truck driver named Rock Hudson.

Adventure | Death | War | Flying | Battles | America
This product is made-on-demand by the manufacturer using DVD-R recordable media. Almost all DVD players can play DVD-Rs (except for some older models made before 2000) - please consult your owner's manual for formats compatible with your player. These DVD-Rs may not play on all computers or DVD player/recorders. To address this, the manufacturer recommends viewing this product on a DVD player that does not have recording capability.

A Gathering of Eagles
$19
Add to Cart