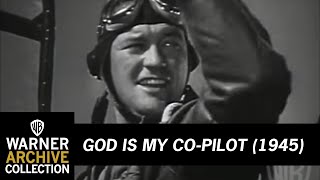 Six P-40 fighters come shrieking out of the sun, guns blazing. They're outnumbered and outgunned by the 18 enemy Zeros below them. But they won't be outfought. Wartime history and action entertainment soar in this high-flying and enormously popular World War II-era spirit-lifter based on the bestseller by fighter pilot Col. Robert Lee Scott, Jr. Dennis Morgan plays Scott, an inexperienced "textbook pilot" who asks to fly with the all-volunteer, battle-seasoned Flying Tigers headed by Gen. Claire Chennault (Raymond Massey). Fighting to keep the critical Burma Road supply line open, Scott becomes an ace. He's cool under fire and convinced he's flying on his own skill and courage. But after several brushes with death, he comes to realize what many fliers know: up in the heavens, he is not alone.

A rousing wartime drama, based on the autobiography of Col. Robert Lee Scott, Jr., a decorated Flying Tiger fighter pilot. Colonel Scott was operating cargo planes over the Himalayan Hump. He dreamed of serving his country more directly, but was originally told he was too old. Scott eventually convinced a superior to allow him and his Flying Tigers to fly combat missions to assist the Chinese against Japan. Dennis Morgan stars as the unlikely hero, but the show is stolen by Raymond Massey as Major General Chennault. The supporting cast is filled with notable character actors including Richard Loo as Scott's nemesis, Tokyo Joe. The film is filled with philosophical questions about fate and survival during war and what role faith plays. In its original release in 1943, some gory sequences passed through the Production Code because the violence shown is all against the Japanese, America's enemy.

True Story | War | World War II | Fighter Pilots
This product is made-on-demand by the manufacturer using DVD-R recordable media. Almost all DVD players can play DVD-Rs (except for some older models made before 2000) - please consult your owner's manual for formats compatible with your player. These DVD-Rs may not play on all computers or DVD player/recorders. To address this, the manufacturer recommends viewing this product on a DVD player that does not have recording capability.