Glenn Ford straps on his sidearm and his sense of humor to portray Jason Sweet. George Marshall directs Ford, Shirley MacLaine, Leslie Nielsen (as the villain) and more familiar talents in a tale that combines genre sendups with showdown heroics. 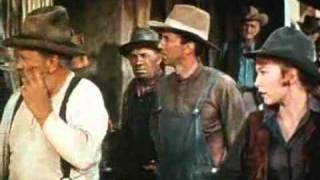 If there's one word in Powder Valley's cattle country that makes the locals' jaws clench and trigger-fingers twitch, here it is: sheep. But easygoing Jason Sweet won a trainload of sheep in a poker game and he aims to graze them. And rolling, green Powder Valley looks like the perfect place.

In the year he was named the top male box-office draw, Glenn Ford strapped on his sidearm and his sense of humor to portray Jason. George Marshall, who showed how the West was fun in Destry Rides Again, directs Ford, Shirley MacLaine, Leslie Nielsen (as the villain) and more familiar talents in a tale that combines genre sendups with showdown heroics.

THE SHEEPMAN was touted as a comedy by some of MGM's publicity people. It really isn't, but this western does have its lighthearted moments. Glenn Ford stars as a hard-bitten sheep farmer, running up against the opposition of cattle ranchers. Shirley MacLaine is a no-nonsense frontier girl who becomes the bone of contention between Ford and cattle baron Leslie Nielsen. Ford is able to get a leg-up in the community by humiliating Nielsen's top gun (Mickey Shaughnessy) in public. The range war comes to an end when Ford and Nielsen go one-to-one. Because THE SHEEPMAN didn't do well in its initial engagements, MGM reissued the picture under the more aggressive title THE STRANGER WITH A GUN.

Enemies | Rivalry | Love Triangle | Cowboys | Families | Love | Battles
This product is made-on-demand by the manufacturer using DVD-R recordable media. Almost all DVD players can play DVD-Rs (except for some older models made before 2000) - please consult your owner's manual for formats compatible with your player. These DVD-Rs may not play on all computers or DVD player/recorders. To address this, the manufacturer recommends viewing this product on a DVD player that does not have recording capability.